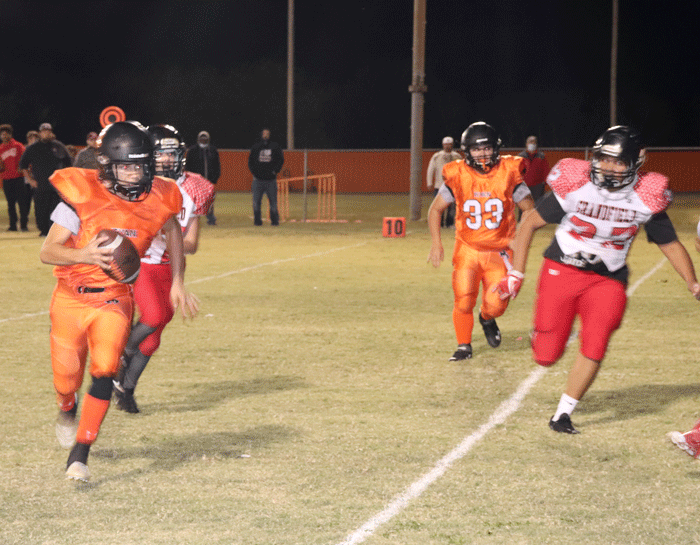 It was a quick end to what has been a difficult season for the Ryan Cowboys last Friday night in northwest Oklahoma.

In the first-round playoff game at Buffalo, the Bison rolled to a 46-0 victory over the Cowboys in a contest that ended at the half.

The Cowboys were simply outmanned and the athleticism and quickness of the Bison was too much for Ryan to handle in a playoff game that was only made possible by the state athletic association allowing all schools to participate in the football playoffs because of numerous games not played this past season.

Buffalo came into the game ranked in the top five in Class C in every poll and the Cowboys left town with a complete understanding of why they are worthy of those rankings with what is now a 9-1 mark heading into tomorrow’s contest with Boise City in the second round of the playoffs.

The Cowboys could not get anything going offensively as the Bison were part of the Ryan backfield throughout the contest.

And, the Cowboy defense was simply no match for the Bison’s explosive offense.

The Bison ran only 12 offensive plays over two quarters. They scored on six of those plays.

The Cowboys ran 30 plays on offense and produced only 29 total yards. Six of those offensive plays were punts.

After forcing a Ryan punt on the first possession of the game, the Bison took over at their own 26-yard line. Buffalo drove 74 yards in five plays and overcame two penalties for the first score of the game.

Dalton Cosby finished off the drive from three yards out and Blaise Rogers ran for the two-point conversion giving Buffalo an 8-0 lead with 8:03 left in the first quarter.

The Cowboys were forced to punt again and after a short punt was returned 20 yards, Buffalo was beginning its second drive at the Ryan 20.

On the first play, Colton Eskew found Eli Alley for a 20-yard touchdown pass and catch. Kade Harlan ran for the two points and with 7:08 left in the first quarter Buffalo was in front, 16-0.

Ryan tried to respond and had one of its longest drives of the night following the kickoff. After picking up one first down the drive stalled and the Cowboys were forced to punt again.

After a penalty on the punt return, the Bison drove 42 yards in just two plays with Harlan finishing the short drive on a 42-yard scamper. Blaise Rogers ran for the two points and Buffalo was in command, 24-0, with 1:08 showing in the first quarter.

The longest play from scrimmage for the Cowboys came on the next-to-last possession of the game as Racen Williams found Mason Adsit over the middle for a 30-yard completion that moved the Cowboys into Bison territory for the only time in the game.

After the final touchdown by the Bison – an 80-yard run by Harlan, the Cowboys’ Trey Bryant wrapped up the runner on the two-point conversion leaving the score at 46-0 with 3:02 left in the game.

The Bison ran only nine running plays over the two quarters and rolled up 242 yards rushing.

Two Ryan seniors played their final game of their high school career – Bryant and Clayton Applin. Grayson Tomberlin, another senior on the squad, missed the majority of the season with a knee injury.

COWBOY CORRAL: The Cowboys finished the season with a 1-10 mark and that is only the second time in 101 years of football Ryan has recorded 10 losses in a season….This was the eighth time in school history the Cowboys have finished a football season with only one win…The Cowboys are now 1-2 against the Bison and all three meetings have been in the playoffs….The minus-nine yards rushing ties a school record set earlier this year against Thackerville….This was the fifth time the Cowboys have lost a playoff game by the mercy rule….It was also the third shutout loss for the Cowboys in the playoffs in school history – the other two were losses to Balko and Central High….Ryan is now 24-28 in playoff games in school history and 23-27 since beginning eight-man play in 1978…In playoff games played on the road, the Cowboys are now 3-14 in school history….Buffalo’s last scoring play of 80 yards tied for the second longest scoring play by an opponent in the 2020 season….The Cowboys had previously given up two scoring plays of 90 yards against Thackerville and Geary.