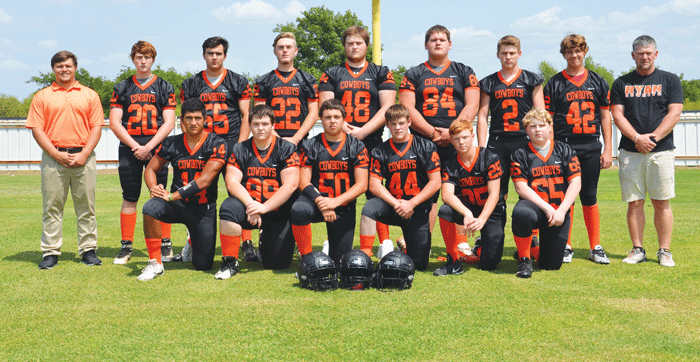 The 99th season of high school football at Ryan is slated to begin tomorrow night (Friday) when the Snyder Cyclones invade the Bob Givens Sports Complex.

Kickoff for the season opener for both teams is set for 7:30 p.m.

This will be the earliest season opener in school history as the contest is part of Zero Week in high school football in Oklahoma.

Teams can elect to start the season one week early and forego a second scrimmage date. The advantage is teams that play during Zero Week will have a week off during the regular season.

Snyder ended the Cowboys’ season a year ago at Ryan as the Cyclones took advantage of numerous Ryan turnovers to post a 38-8 victory.

It was the first year returning to the playoffs for Ryan after a two-year absence and the Cowboys of first-year head coach Tony Tomberlin are looking to improve on last season’s 6-5 record.

Tomberlin will be taking over for long-time head coach Stan Mueggenborg after serving as an assistant for the veteran coach the past 12 years.

The outlook for the Cowboys for 2018 is guarded. The coaching staff faces the tall task of replacing six of eight starters on the defensive side of the ball.

However, quarterback Grayson Tomberlin returns for his sophomore campaign after starting all 11 games a year ago as a freshman.

Joining Tomberlin, last season’s district newcomer of the year, in the backfield will be talented senior and all-district running back Skyler Parkhill.

Both players will give Ryan a solid nucleus from which to build on offense.

Parkhill was the second leading rusher last season with 620 yards on 93 carries and five rushing touchdowns.

The Cowboys will feature a freshman in the backfield with Caleb Ferrin expected to start at the other running back position.

Kalen Weldon will return at one end for the Cowboys and Andrew Villerreal will move from the backfield to the other end position.

Two seniors, Sam Brown and Justin Williams, along with sophomore Trey Bryant will be counted on to try to open up running lanes for the backs and give Tomberlin time to find receivers.

The Cowboys will feature a bit more wide-open attack with more spread offense and implementing the pistol formation.

Defensively, things are a bit unsettled. Not only will there be six new starters, but coming out of last week’s scrimmage, there are still some battles going on for starting positions.

Pacen Wiest and Bryant are battling for a starting role at nose guard and the defensive end positions are still up for grabs in the 3-2 defense.

The defense will need to mature quickly as Snyder, the Cowboys’ first opponent, will bring a potent offensive attack that will feature one of the state’s top sprinters in Trevor Evans. He was the state champion in Class A in the 400 meters and the runner up in the 100 meters last spring.

“I would say at this point the offense is a step ahead of the defense,” Tomberlin noted heading into this week’s final few days of practice.

“On defense we are still trying to figure some things out,” Tomberlin said.

Tomberlin was not particularly pleased with the Cowboys’ scrimmage with Maud last week.

“We have a lot of improving to do, but we will watch film and we will get better,” said Tomberlin.

“We are looking forward to some things and we are trying to get some excitement back in the program. The kids’ attitudes are good and we are lifting every day and they are getting stronger,” Tomberlin added.

Snyder will provide a tough challenge for the Cowboys’ season opener. The Cyclones are picked fourth District B-3, but ahead of them are Carnegie, Alex and Cyril – all top 15 teams in the preseason.

Tomberlin will be assisted by first-year coach Austin Masoner.