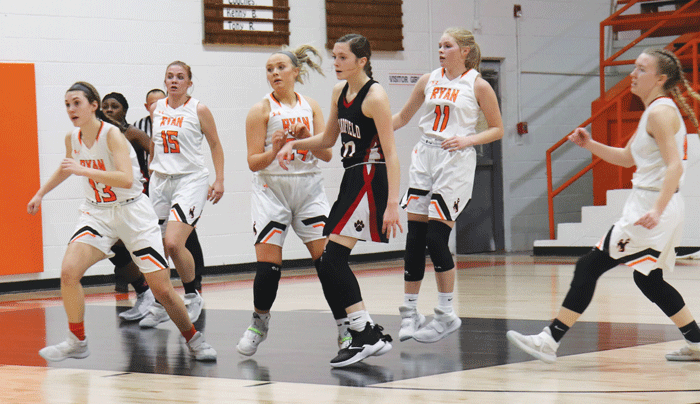 The Ryan Cowgirls’ bid to win a second tournament this season fell just short last weekend as the squad finished third in the 11th annual Bulldog Bash at Healdton.

The Cowgirls dropped a 47-35 decision to the host school in the semifinal round on Friday.

In Thursday’s first round the Cowgirls dominated Elmore City-Pernell in a 52-30 victory.

All three of the opponents in the tournament for the Cowgirls were from Class 2A.

The Cowboys had a tough weekend as they dropped the first two games in the tournament.

The Fox Foxes handed Ryan a 50-36 defeat in the first round last Thursday and then Ringling pounded the Cowboys in the consolation semifinals, 50-30.

The Cowgirls dominated play in the second and third quarters to get the win over the Lady Savages.

The Lady Savages kept it close in the first quarter as Ryan held only an 11-10 lead at end of the quarter.

In the second quarter the Cowgirls went on a 12-4 run to take a 23-14 lead at intermission.

In the third quarter, Juliet Spangler and Samantha Good found the range and the Cowgirls dominated the Lady Savages, 17-5, to hold a commanding 40-19 lead heading to the final quarter.

Good led the Cowgirls in scoring with 21 points and was the only Cowgirl in double figures, but six of the seven players that saw action in the game scored.

Healdton avenged an earlier loss to the Cowgirls with a strong first-half performance and taking advantage of superior depth to earn a spot in the finals of the tourney.

The Cowgirls fell behind the Lady Bulldogs, 17-9, after the first quarter and could never get on track offensively. Healdton increased the lead to 28-15 at intermission.

In the second half, the Cowgirls could only stay even with the Lady Bulldogs.

The Cowgirls outscored the Lady Bulldogs, 15-13 in the third quarter to trim the advantage to 41-30, but Ryan could only score five points in the fourth quarter – including only one field goal – and could not cut in the deficit.

J. Spangler had 15 points and York added 10 points to pace the Cowgirls in scoring.

The Cowgirls have won only two of 14 meetings with Healdton since the 1993 season.

The Cowgirls used a strong second and fourth quarters to earn the first round victory despite missing a number of shots from point-blank range.

The two squads were tied at eight apiece after one quarter, but Ryan went on a 16-6 run in the second period to take a 24-14 lead at halftime.

The Cowgirls were able to extend the lead after three quarters with a 13-10 advantage giving Ryan a 37-24 lead heading to the fourth quarter.

In the final period the Cowgirls pulled away by outscoring the Lady Badgers, 15-6.

The Cowgirls were impressive on the offensive board with 14 rebounds compared to the Lady Badgers’ two offensive rebounds. Overall, the Cowgirls held a 40-16 advantage on the boards.

On the defensive end, the Cowgirls produced nine steals in the game.

York led the Cowgirls in scoring with 20 points, while J. Spangler added 15 points.

With this win the Cowgirls hold a 3-1 advantage over the Lady Badgers since the 1990 season.

It took the Cowboys three quarters to get on track offensively and by that time the Blue Devils had built a big lead to earn a spot in the consolation finals.

Ringling sped to a 17-6 advantage after the first quarter.

In the second quarter the Cowboys could not find the basket as they scored only three points – all on free throws. In the meantime the Blue Devils were expanded the lead to 26-9 at the half.

The Blue Devils increased the lead to 39-15 after the end of the first quarter.

The Cowboys finally began to put points on the scoreboard in the final frame, but the deficit was too much for Ryan to overcome.

The 15 points scored in the quarter by Ryan was as many as the previous three quarters combined.

Andrew Villerreal topped the Cowboys in scoring with 13 points, but no other Cowboy could hit for double figures.

This was the fifth straight loss to the Blue Devils dating back to 2017.

Despite missing a pair of starters the undefeated Foxes rallied for the first round win over the Cowboys.

The Cowboys assisted with the comeback by committing over 20 turnovers in the contest.

The Cowboys jumped out to a 12-4 lead after the first quarter, but Fox found the shooting range in the second quarter and outscored the Cowboys 17-6 to hold a slim 21-18 lead at halftime.

Fox increased the lead in the third quarter with a 10-6 scoring advantage to take a 31-24 lead into the fourth quarter.

The Foxes pulled away in the final quarter with a 19-12 scoring advantage.

Logan McCurtain hurt the Cowboys with his outstanding outside shooting. McCurtain finished the game as the leading scorer with 19 points and that includes five three-pointers.

Grayson Tomberlin led the Cowboys in scoring with 12 points.

Ryan still holds a 6-2 record against the Foxes with one year’s result unknown dating back to the 1996 season.