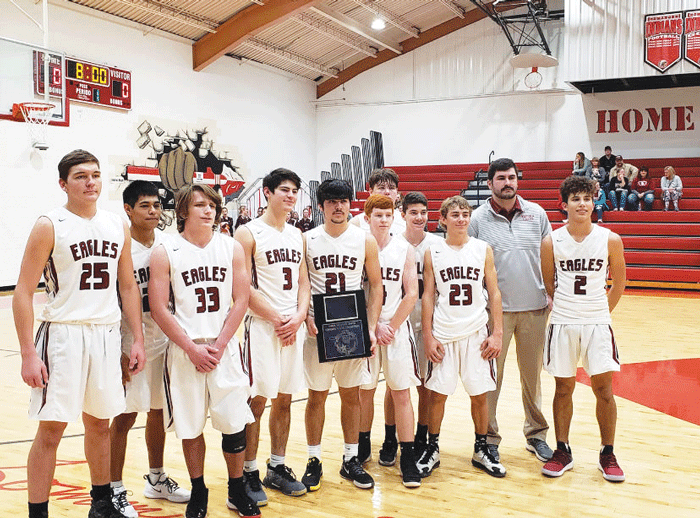 After dropping a first-round game to Davis, the Waurika Eagles came back to win two straight games in two days to claim the consolation title of the 89th annual Stephens County Tournament at Comanche.

Not only did the Eagles win two straight games, but they did it in impressive fashion with a 65-36 win over Bray-Doyle on Friday and a 48-27 victory over Central High last Saturday afternoon.

Waurika’s boys dropped into the consolation bracket after the loss to Davis.

The Lady Eagles also lost their first round game to Marlow and in Friday’s consolation semifinals the Lady Eagles fell to Central High, 40-37.

Central High hung around the Eagles in the first half, but Waurika managed to pull away in the fourth quarter with a 20-point explosion to claim the big win.

The Bronchos actually led after the first quarter, 9-7, but Waurika went on a 10-3 spurt in the second quarter to hold a 17-12 advantage at the half.

Waurika was able to extend the lead in the third quarter by outscoring Central, 11-6, to carry a 28-18 lead into the final quarter.

The Eagles overwhelmed Central in the fourth quarter with the 20-point outburst that was fueled by three treys – one each by Treyton Torrez, Kevin Garcia and Peyton Fletcher – to give the Eagles the 21-point win.

Torrez led the Eagles in scoring with 15 points.

The Lady Eagles and Central High fought to a 7-7 draw after the first quarter, but the Lady Bronchos connected on a pair of treys in the second quarter to outscore Waurika, 13-8, and take a 20-15 lead into the locker room.

Central High was able to add to the lead with a 10-7 scoring advantage in the third quarter to hold a 30-23 lead.

Waurika put on a furious rally in the fourth quarter and outscored the Lady Bronchos, 14-10, but could not overtake the Lady Bronchos as Central High was able to connect on five of eight from the charity stripe to help hold off the Lady Eagles.

Tallin Mora led the Eagles in scoring with nine points.

A second quarter scoring barrage by the Eagles scored proved to be the difference in handing the winless Donkeys the loss and earning the berth in the consolation finals.

Waurika held only a 10-7 lead after the first quarter, but when on a 16-5 run in the second quarter giving the Eagles a commanding 26-12 lead at the half.

Coming out of the locker room after intermission the Eagles continued to pound the Donkeys and outscored Bray-Doyle, 20-15, to increase the lead to 46-27.

The Eagles put up 19 points in the fourth quarter while holding the Donkeys to only 10 tallies to record the victory.

Torrez led the Eagles in scoring with 19 points including the only two treys of the game for Waurika. Fletcher added 12 points and Turner Mora added 10 points.

Eight different Eagles contributed on the scoreboard in the contest.