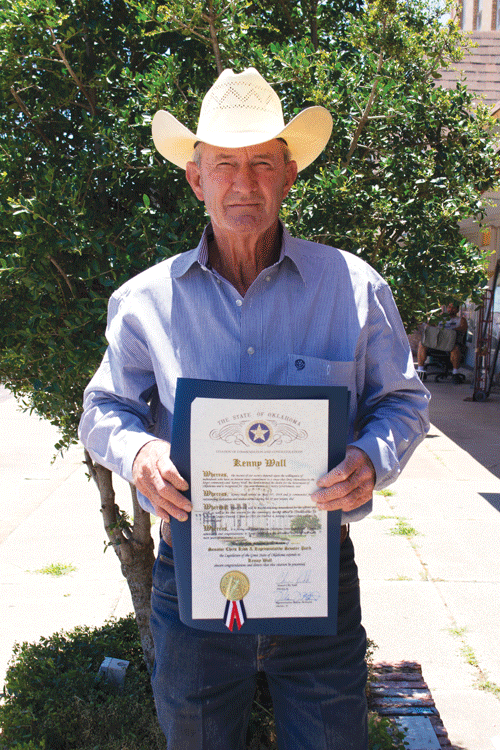 Kenny Wall had begun a journey in county government by becoming  the District 1 County Commissioner in Jefferson County.

In 2008 he left the District 1 Commissioner position to become the manager of projects for the Circuit Engineering District number 6.

As the only full-time employee of District 6 he worked for nine counties as an overseer of the road and bridge projects, and hired the engineers for the projects. He would then oversee the project all the way through to completion.

Although the Oklahoma Cooperative Circuit Engineering Districts were set up in 1997 there wasn’t any money available for the hiring of employees until 2008. Kenny Wall was the first full-time employee for District 6, Jefferson County is a part of that district.

He was the one who set up the way the district 6 is operated.

Because there wasn’t any money to hire other staff personnel he had to be creative. Most of the work he did by himself.

His office was in his home because they didn’t have the money to buy offices.

The individual counties worked with Wall on the projects.

The districts are funded by the Department of Transportation.

Wall said he was able to give back around $540,000 to the counties in his district each year.

His goal was to always do what he could to help the individual counties the best he could.

What he will miss the most will be the interaction with the commissioners of those counties.

What he will enjoy about retirement is working with his reining horses and competing in shows.

He has been participating in the reining horse competitions for about 20 years.

He recently won first place in a competition at Shawnee after sitting out for about a year.

Wall will also enjoy spending time with his grandchildren. He and his wife Sheila have three. Their daughter Shandra Yasuda has two girls and a boy.

He says they keep him busy. But he enjoys them immensely.

Broadband 81 Expanding All Along Highway 81 and Jefferson County