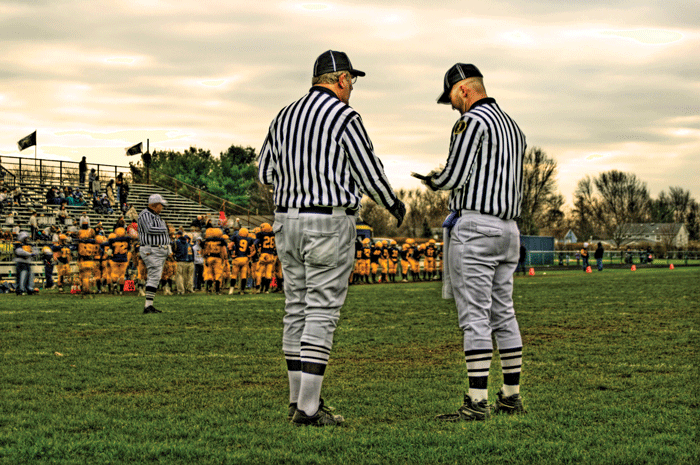 Before we get to the information in this column, allow me to make a few disclaimers.

Officials in any sport are human. They can make mistakes and often do. It is unfortunate, but that is reality and since we are all human, there should be some level of understanding of this when there are bad decisions made in a game by officials.

Another issue in today’s high school sports arena is a critical shortage of officials to call the games at the high school and junior high level. Why is this? We will discuss some of those reasons further in this column.

One other disclaimer – I would never want to be an official. I will admit, however, to expressing frustration as a fan when officials make a bad call.

However, when there are repeated mistakes that are relatively obvious in a game, it is fair to bring those issues to light.

Last Thursday night at Ryan, I witnessed what was one of the poorest officiated games I have ever seen. I have been to a few in my 61 years – about 500 games.

Most of the time fans complain of the officiating when their team loses, but this time Ryan rallied for a last-second 78-74 win over Bray-Doyle.

The discrepancy in the number of penalties against each team in this game was mind-boggling. Ryan was flagged 24 times (not counting one penalty on an extra-point try), while Bray was whistled for only six penalties.

To be perfectly clear, Ryan was guilty of many of those penalties and must find a way to have more discipline during a game if they are to close out the current season with success.

Most of the critical calls came in the second half when the game became close.

Two pass interference calls, which are some of the most difficult to make in football, went against Ryan. One the Bray-Doyle receiver clearly pushed off the Ryan defender, but interference was flagged against Ryan.

The second missed call was actually a no-call as a Ryan receiver was streaking down the right sideline and was bumped by a Bray-Doyle defender keeping the Ryan receiver from reaching the ball.

Probably the worst call of the night came when Ryan coach Tony Tomberlin was giving a defensive signal. The referee blew his whistle and signaled timeout. The Ryan players and coaching staff were bewildered and when discovering none of the players called timeout, the referee was asked who called the timeout.

The referee informed Coach Tomberlin that he called it and when an explanation was given the referee refused to rescind the timeout. In my opinion, that was an easy fix. Simply call the teams back to the field and resume play.

Late in the game when Ryan was trying to drive for a clinching score and run out the clock, a Ryan player lost the ball after being tackled. The film is a bit inconclusive, but it appeared he was down before the fumble, but the officials gave the ball to Bray-Doyle and the Donkeys eventually scored the go-ahead touchdown with 43 seconds to play in the game.

One other call in the fourth quarter that impacted the game was a targeting penalty called against Ryan’s Skylar Parkhill that results in an automatic ejection.

The film was sent to the Oklahoma Secondary Schools Activities Association. It was ruled not to be targeting and the ejection was rescinded so Parkhill will be eligible to play in Ryan’s contest with Wilson tomorrow night.

A few other calls were certainly questionable throughout the game.

This officiating crew must have had an off night. They are regarded as one of the best crews in this area and are usually found officiating at larger schools on a weekly basis.

One of the real issues with officiating in all sports is the lack of numbers of officials in Oklahoma.

As current officials are growing older and eventually hanging up their whistle, younger people are not stepping in to take on the job.

The shortage is real. Just a quick scan of the internet produced articles from Muskogee and Lawton that have been written in the past couple of years about the shortage of officials.

Games have even had to be rescheduled to a different night because officials could not be found to work a particular game.

Now in defense of the people that are not stepping up, it is a greater challenge to officiate games of all sports because kids are bigger and faster than they used to be. In football and basketball in particular the game is faster than ever before.

Many times people are not joining the officiating ranks because they do not want to put up with coaches and fans that at times can be irate and irrational. The abuse they some times take is often excessive. And some sports such as basketball and baseball, the officials are not far from the fans.

And there are a growing number of student-athletes that come with less than the best attitudes and when a call doesn’t go their way, the attitude of the player comes out. This is often detrimental as officials that are human take notice of this and often begin to look at that player a bit unfairly or with more scrutiny.

Players, coaches and fans need to be held accountable for some of the problems with the shortage of available officials.

But, the need for officials is real. Local organizations in Lawton, Duncan and Ardmore are actively searching for new people to join the ranks to call games in baseball, softball, soccer, wrestling, football and basketball.

If you are interested in becoming an official, go to the Oklahoma Secondary Schools Activities Association’s website (ossaa.com) and register. There is a fee and there is a lot of preparation involved to eventually become an official.

The pay level is not great, but if someone needs a little extra cash, you can make up to $1,000 a season and if you can call more than one sport, the figure will increase.

So if you can weather the criticism and you want to be involved at some level with young men and women, you are urged to take the appropriate steps and become an official.

More numbers usually results in a higher quality of product and it is no different with officials. The need is real and the issues are real, but they can be solved.