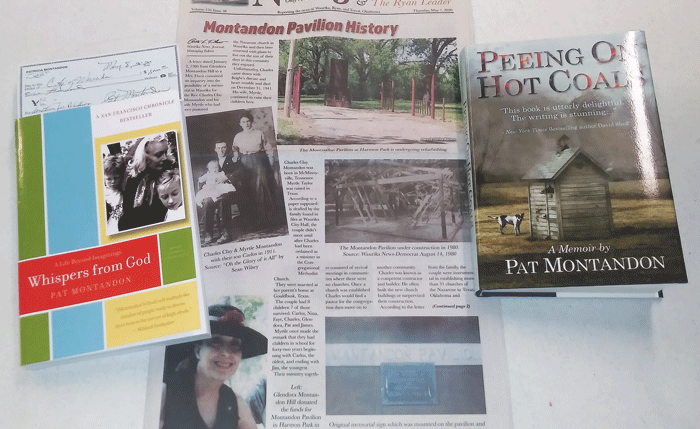 While sorting through dusty old file folders at city hall, Catrina Watters stumbled upon a thick yellow file folder containing the remnants of the history of the Montandon Pavilion now located at Harmon Park.

The information was passed on to the Waurika News Journal. The result was an article detailing the progression of the Pavilion and a short history of the Montandon family and their ties to Waurika printed in the May 7, 2020 edition.

The information Watters found piqued her curiosity leading her to reach out to Pat Montandon, the daughter of the ministers for whom the Pavilion was named.

Their conversations were tentative at first. Watters just wanted to learn more about the family and let Pat know the city was refurbishing the pavilion.

Evidently, this news struck a sentimental chord in the heart of the San Francisco journalist and former television host.

After several more conversations, Pat offered to make a donation to the pavilion project and promised to send Watters two of the books she had written.

True to her word, the books and the donation arrived this past week.

Thanks to Pat’s $1000.00 donation construction on the pavilion can now continue.

One of the books she sent to Watters is titled, Peeing on Hot Coals, A Memior.

In it she covers much of her childhood and recounts memories of Waurika.

Memories of Waurika are also revealed in two of her other books.

Former Irving resident, Jon Harris had the opportunity to visit with Pat at a reading she gave of one of her books in San Francisco (Jon’s current place of residence). He informed her he was about to catch a plane so he could visit Waurika and she asked if she could tag along.

Pat is now 91 years old and enjoying her retirement in Los Angeles, California.