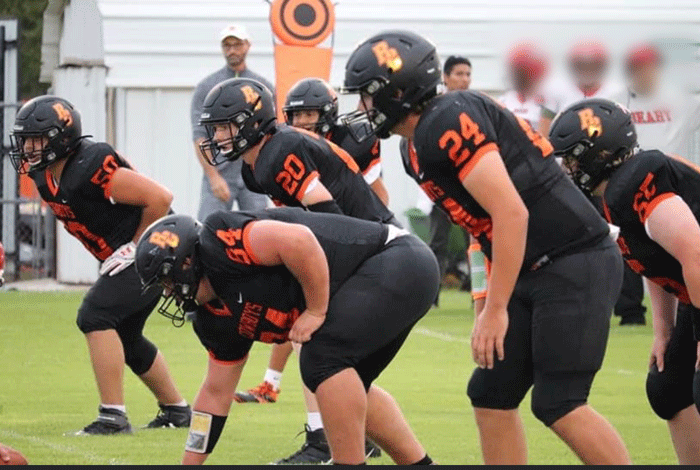 Just when you thought the football season for the Ryan Cowboys could not get worse, the Cowboys suffered a 64-8 defeat at the hands of Thackerville at Bob Givens Sports Complex last Friday night.

The loss was difficult but the Cowboys lost starting quarterback Racen Williams early in the game and the only option was to insert sophomore receiver Julian Rodriguez at quarterback who had not had any snaps at the position in practice or in games this season.

And while Rodriguez did an admirable job in the difficult circumstances, the lack of experience did limit the options for the Ryan offense in the homecoming contest with the Wildcats.

The Cowboys had already lost another player during the week and if Williams cannot recover from his injury, the Cowboys will have only 10 or 11 players to suit out in tomorrow night’s contest at Mountain View.

Mountain View-Gotebo comes into the district game with the Cowboys with a spotless 4-0 mark and ranked fourth in Class C. Kickoff for the game is set for 7 p.m.

With all of the difficult circumstances and adversity the Cowboys are facing last Friday night’s contest added to it as Thackerville hit for two quick scores in the first two minutes of the game.

The Wildcats scored on a 31-yard touchdown pass and passed for the two-point conversion to go on top 8-0 only 34 seconds into the game.

The Cowboys were forced to punt on their first possession and Thackerville wasted no time in scoring again – this time on a 49-yard pass. The pass for the two points was good and the Wildcats had a 16-0 lead with 10:13 still left in the first quarter.

On the next possession the Cowboys fumbled the ball and Thackerville recovered at midfield to set up a seven-play drive that included 20 yards of penalties against the Wildcats.

Blayne Giourgas, who had scored the first two touchdowns for the Wildcats, capped the drive with a 26-yard scoring run. The run for two points failed, but Thackerville was in front 22-0 with 7:25 to play in the first quarter.

On Ryan’s first play from scrimmage after the kickoff the Wildcats intercepted a Cowboy pass and returned it 26 yards to put Thackerville in business on offense at the Ryan 20.

It took Thackerville only four plays to score with Aziz Hernandez scoring from seven yards out. The conversion pass was successful and the lead had increased to 30-0 with 5:40 left in the first quarter.

Ryan was again forced to punt on the next possession and Giourgas fielded the punt at the Wildcat 42-yard line and raced 58 yards for the touchdown. The run failed, but the Wildcats held a 36-0 lead with 3:47 left in the first quarter.

Both teams turned the ball over on their next possessions with Trey Bryant recovering a Wildcat fumble to give Ryan the ball at the Thackerville 41.

On first down, Rodriguez found Skyler Wickware on a short pass and Wickware broke a couple of tackles and sped down the right sideline for the 41-yard touchdown.

Rodriguez found Carson Cooper on a pass for the two-point conversion and Ryan had cut the lead to 36-8 with 2:15 left in the first quarter.

Thackerville answered with another score before the end of the quarter. An onside kick was covered by the Wildcats and it put Thackerville at its own 49 to start the scoring drive.

In five plays Thackerville found the end zone as Giourgas made a diving catch just inside the goal line for a 14-yard score. The try for two failed, but the Wildcats had built an insurmountable 42-8 lead with just 21 seconds left in the first quarter.

Ryan turned the ball over on downs on its next possession and Thackerville began another scoring drive. This time it took the Wildcats only four plays to move 37 yards. Hernandez scored on a 17-yard run and Wade Oglesby caught a two-point conversion pass to increase the lead to 50-8 with 9:23 left in the second frame.

Thackerville added two more scores before halftime to end the game by the mercy rule.

Hernandez caught a 29-yard pass with 4:14 to play in the second quarter to put the Wildcats in front, 56-8.

Justice Rodriguez capped the Thackerville scoring onslaught with a 56-yard run with 2:56 left before the half. The Wildcats ran for the two-point conversion to set the final margin.

The Cowboys could not muster anything on offense most of the night as they picked up only one first down – and that was on the scoring play.

COWBOY CORRAL: The Cowboys are now 0-4 on the season and the last time Ryan has opened a season with four straight losses came in the 1994 season….Ryan finished the night with minus-9 yards rushing and that is a new school record that broke the old mark of minus-3 against Snyder in the 2018 playoff game…The 64 points scored by the Wildcats is the highest total scored in the series with Ryan….The previous high score by Thackerville as 50 points in a 1993 loss….The 56-point margin of victory by the Wildcats is the most in the series that dates back to 1980….The previous greatest margin of victory for Thackerville against Ryan was 46 in a 2013 contest….This was the second loss to Thackerville in a homecoming game in two homecoming encounters….Ryan is 6-4 in the last 10 homecoming games.