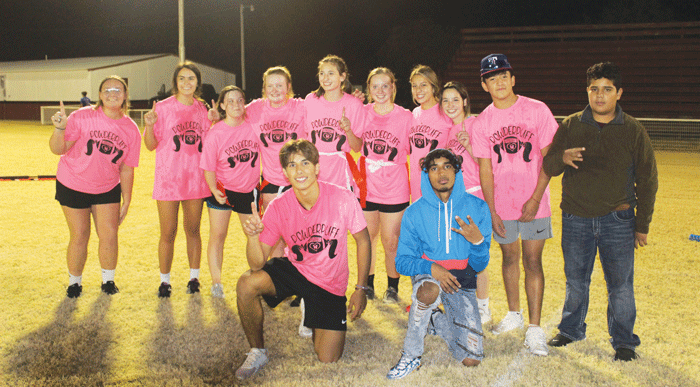 The second annual Powder Puff football band fundraiser was held last Thursday, November 5th at the Cy Sloan Memorial Stadium. The participants were divided into two teams; the Pink Team was made up of Freshman and Juniors girls, and the Blue Team was made up of Sophomore and Senior girls. Eagle football players Cache Dunn, Kevin Garcia, Treyton Torrez, and Isaac Camarillo.

The Pink team won 36-0.  Coach Treyton Torrez had no trouble expressing his excitement over their win, saying, “Well, I knew we were going to beat them, and the team played hard. They did their jobs great.  The whole team played awesome and with the help of the great coach Treyton Torrez, we got a big win.” Garcia, who coached for the Blue Team, said, “The game didn’t go as planned.  I hoped we would have scored at least once, but I know they’ll get them next year.”

Mackinze Taylor, a sophomore player on the Blue Team, said, “Well I had a blast. Whether my team won or not, I had so much fun playing with the girls. Never thought I’d have a better team. I love all of them and I’m going to miss my seniors next year.”   Freshman player Faith Hill agreed, saying “I think it’s safe to say both teams enjoyed themselves.”