Home News “They are more than just numbers!” Waurika remembers those who made the... 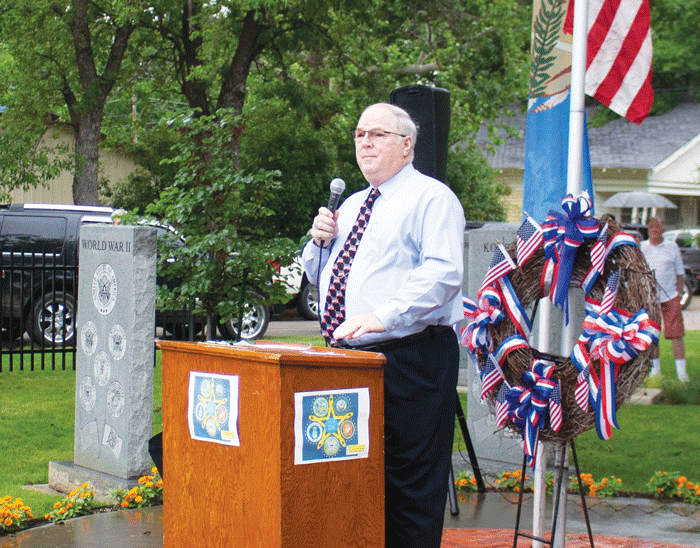 As rain fell gently on those gathered at Veterans Park in Waurika this past Monday, former Waurika School Supt. Roxie Terry delivered a moving speech honoring the brave men and women who made the ultimate sacrifice for their country.

Terry recalled a time when he was a boy attending a Memorial Day ceremony and hearing a veteran talk about how members of his family had died in service to the nation.

“I heard the speaker say, ‘My granddad is buried over there, my dad and brother are buried just down from his grave. They all died in combat, all in different wars.’”

From then on when he would hear the statistics of those who had died in combat were more than just a number. They were a member of someone’s family.

“I guess that was the first time that I realized that the term “Killed in Action” didn’t just mean a number that Walter Cronkite talked about on the evening news.”

He went on to say, “Every person that becomes a soldier takes an oath and when they sign those enlistment papers they are signing a blank check payable to their country in the amount up to and including death. They do this to stand up for our country, our freedom, our way of life. Many, many people have made the ultimate sacrifice for us and that is why we meet here today. To honor them, to thank them, to memorialize them and their families.”

He also recognized the veterans who had passed on during the previous year.

Fittingly, a tribute to Command Sergeant Major Bennie G. Adkins was read by Jennifer Aldridge and Tim Adkins, both relatives.

The Waurika native received a Medal of Honor for his service and there is a statue of Adkins in Veterans Park.

The solemn service honored our heroes and their families.