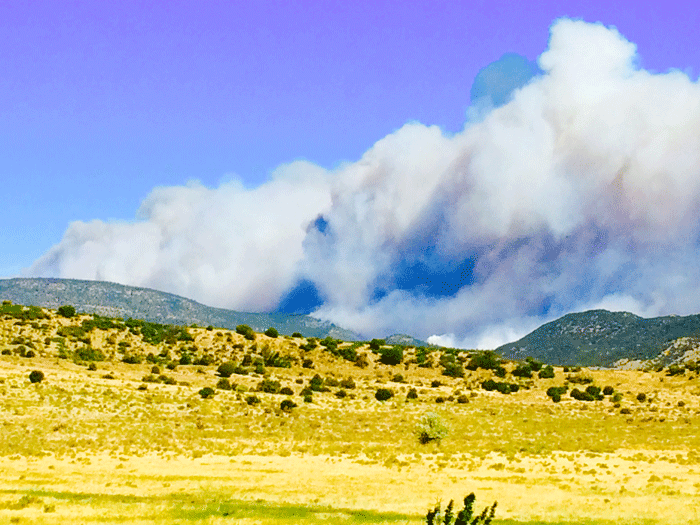 It was dry windy morning, May 31st (my sisters birthday) I was in the southern Colorado Rocky Mountains trout fishing when I noticed, over the tops of the mountains south of me, a column of smoke hanging in the air like a thick wall cloud. With no telephone or radio reception I hoped for the best and continued to fish.
After i wrangled my limit of trout to the shore, on my stringer and in the ice chest, down the mountain and into town I went to call my sister and wish her Happy Birthday.
Once in town, I picked up the local news on my radio to find out that smoke I saw earlier was in the high country of Northern New Mexico, in the Ute Park Mountains.
This is were things get exciting… My Elderly Aunt and Uncle own a cabin in those mountains along with several of their friends (also from Oklahoma). I immediately made a call to them and was able to get through. My uncles voice was calm when he answered his phone, which relieved me. I asked if the fire was close and what he was doing? His reply was… “Well, we are just sitting on the porch watching the helicopters drop water on the fire” and that they didn’t feel they were in danger. I told them I was just an hour and a half away and that I would come help evacuate them if they needed me to. He assured me he would call and we hung up.
The next morning, June 1st, I woke to see the smoke was more intense and covered a larger area…the fire was now a out of control wild fire. I immediately called my uncle, it went straight to voicemail with each call attempt. Thinking he wasn’t up yet, I went ahead and hopped in my truck and headed to Ute Park so that I could sit with them until this fire was out of their area.
The closer I got, the worse it looked, I started to get concerned and so I mashed down on that pedal to get there as soon as I could. As I approached Cimmeron New Mexico, the smoke was thicker in town and air quality was “poor”… Once in town it was an eerie feeling, the only traffic were fire bush trucks that where extinguishing fire ambers in town. I got on highway 64 west ( the only road into Ute Park), at the edge of town I rolled up on a road block stationed by the State Highway Patrol (impossible to negotiate with) and due to trees down, they did not allow me to proceed to Ute Park.
I then got my hunting maps out that showed every back road in that area… After several attempts, I was unable to get through even on back roads, the fire was too large and intense. Ute Park was surrounded by fire and there were no evacuation routes open, my Aunt and uncle had to ride it out!
I later found out through a news crew on the scene that the cell tower melted and collapsed. I returned to Cimmmeron only to find the town was in mandatory orders to evacuate the entire town, instead of getting closer to my family in need, I was forced to move further away, miles away to Raton New Mexico (on the only open route out of Cimmeron). As I was in line of evacuating cars on the highway, I spotted another dirt road leading back into the mountains, I whipped it in there and headed back through the fire to Ute Park, the smoke got thicker as I drove, so I stopped for my own safety and just watched. I then noticed a antelope with three babies come running out of the smoke.. I didn’t know they could even have three babies, so I assumed, she was leading the other two to safety that  for some reason got separated from their mothers. As I sat there, I received a call that my aunt and uncle were safe and being evacuated.
It was perfect timing because the game warden pulled up with sirens and lights a blaring, so I mashed down on that pedal and raced him to the gate outa there…. He locked me out.
I returned back to Colorado to my fishing hole, thanked Jesus for a the safety of my family and to watch over the men and women that risk their lives making ours safer! He replied, your welcome, by filling my stringer again with Rainbow trout!