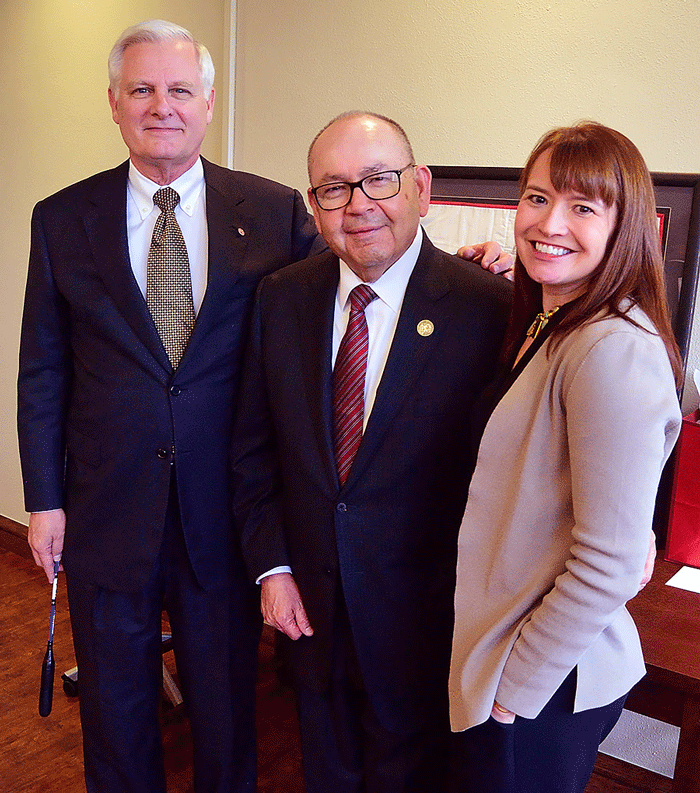 NORMAN, Okla. – University of Oklahoma (OU) expressed its gratitude to the Chickasaw Nation during a reception and open house at the OU Native Nations Center Thursday, April 26.

Chickasaw Nation Governor Bill Anoatubby accepted on behalf of the Chickasaw Nation, which provided endowment funding for the center, located at Copeland Hall on the OU campus. A portion of the endowment was used to renovate and refurbish the Department of Native American Studies.

“We are pleased to support OU in the development of the Native Nations Center,” said Gov. Anoatubby. “We believe the center will play a vital role in elevating the level of Native American education in Oklahoma and across the United States. This investment will help advance research and scholarship essential to a brighter future for individual students and Native American communities,” he added.

The area will be used for gathering and events, including nationally known speakers and such outreach efforts as workshops on tribal governance and curriculum development. The center will also host listening sessions with tribal leaders to develop a deeper understanding of their communities’ goals and objectives.

Gov. Anoatubby was presented with a Pendleton blanket by Amanda Cobb-Greetham, director of the center and department chair for OU Native American Studies. Dr. Cobb-Greetham is a Chickasaw citizen and former Chickasaw Nation administrator of history and culture before joining OU in 2013.

“We are grateful for the Chickasaw Nation’s generous gift toward this important program. The Native Nations Center plays a significant role in elevating and institutionalizing collaborative relationships with the 39 Native American nations of Oklahoma,” said OU President David L. Boren.

OU President-designate James Gallogly attended the open house on behalf of Boren who will step down as the university’s top leader June 30 after serving 24 years.

“OU is poised to become not only the leading Native American Studies academic program in the nation, but also the leading institution in all areas relating to Native Americans, including recruitment, retention and research,” said Dr. Cobb-Greetham. “We have amazing institutional resources, from our Native students, faculty and staff to archival collections.

“The center provides a front door to OU’s acclaimed Native American programs,” she said. “The center will enhance research opportunities for scholars. It will provide much-needed resources for Oklahoma’s tribes while also enriching the lives of our students and all Oklahomans. With the help of the Chickasaw Nation, OU’s Native Nations Center will allow us to recruit and retain the finest and brightest minds in the country.”

Research will be a major focus of the Native Nations Center, primarily in the areas of tribal governance and policy, language revitalization and indigenous arts and cultural expression. The center will facilitate grant submissions and develop a large, digital database of national Native American resources for use by students, researchers, communities and tribal governments.

The idea of a physical center devoted to Native American resources began in 1915. OU was among the first colleges in the nation to offer Native American courses. Native American Studies degrees were conferred at OU starting in 1994 and Boren elevated the program to a department in 2015.

In the past 20 years, Native American Studies has awarded more than 200 degrees; alumni of the department have distinguished themselves in a wide range of careers, including tribal government, law, health policy, filmmaking and media, historic preservation, language revitalization and education.