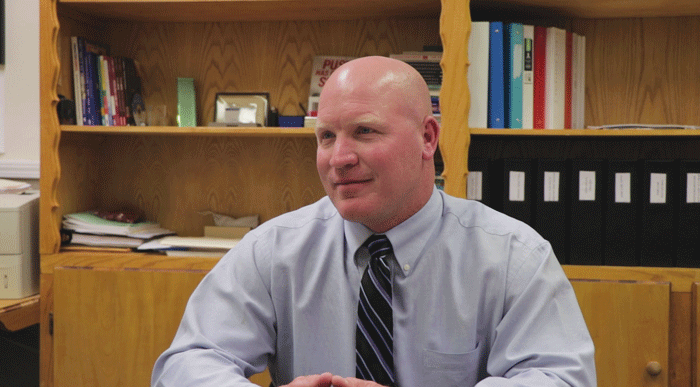 Although he began his student teaching in Waurika back in 2004, his history with Waurika schools goes back further than that.

His family have deep roots in Jefferson County.

After beginning his student teaching, he was hired soon thereafter in January of 2005 as the second grade teacher at the Elementary.

For the past eight years he has served as the Elementary Principal.

By now, everyone is probably aware that Cody Simmons is the new Waurika Public Schools Superintendent beginning July of this year.

Over the past couple of weeks the reality of the role has sunk in.

He says he has been getting more familiar with the high school.

Cody said he recently met with the high school principal and the athletic director.

He is becoming more familiar with the high school.

The adjustment for him will be managing the overall school system rather than just the Elementary.

He says he is looking forward to the new experience.

Simmons says that one of his expectations for the upcoming year is to close the gap between the Elementary and the High School.

He would like to see the school system be more of a whole than separate parts (Elementary, Middle School, and High School).

During his time as principal, the Elementary has achieved “Blue Ribbon” status.

That status is determined by the test scores over three consecutive years.

Simmons is a busy man.

Besides being a full time school administrator, he also enjoys mowing yards, working out, and most of all spending time with his family.

He says right now they are enjoying ball games several nights per week.

Simmons is also deeply involved in the community.

He was instrumental in the establishment of the Veterans Park downtown.

He is quick to give credit to others who have assisted in the success of the park.

Craig Williams, he says was gracious to add his professional touch to the landscaping.

Simmons also attributes the success of the Elementary, including its “Blue Ribbon” status, to the hard work and dedication of the teachers.

“I feel like the teachers here are all high quality enthusiastic professional teachers. Whenever you surround yourself with [people like ] that good things will happen,” Simmons says .