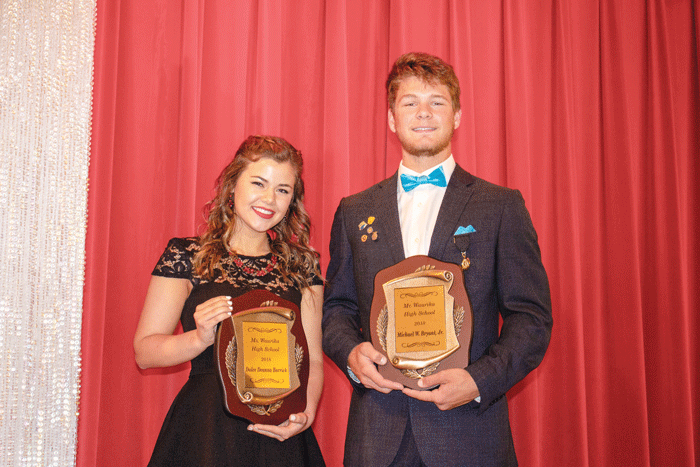 Recently some much deserving students of Waurika High School were recognized during the presentation of the 2018 Mr. WHS and Ms. WHS.

According to Mr. Lunn at this year’s ceremony, it is the highest honor bestowed on students of Waurika High School. The winners are selected by a committee that only knows the students by their submitted resumes. It’s truly unbiased.

Here are the list of candidates and their resumes.

Hayden is a dedicated student at Waurika High School. Hayden has participated in FCCLA and FFA, and also been a part of the cross-country and baseball teams.

Hayden has been a very active member of his local FCCLA chapter. He has spent his time being involved in many service activities including raising funds for Toys for Tots organization, participating in Autism Awareness Fundraiser, and raising funds for Operation Christmas Toys.

Hayden has donated his time by volunteering to teach elementary students about Halloween safety, working at the Regional Food Bank in Oklahoma City, and assisted children with crafts the Waurika Public Library.

Hayden attends the First Baptist Church in Ringling, OK. He has volunteered to  help with various activities around their church including being an assistant at Vacation Bible School, working as their worship sound technician, and lending a hand in the church nursery. He also spent a June participating in Super Summer with the Oklahoma Baptist University.

Hayden is also a hard worker, having spent his high school  years working cattle, tutoring students, working at Walmart, and serving as a lifeguard at the community pool. Hayden has also been a regular student on the Principal’s Honor roll.

Allee is a dedicated member of Waurika High Schools. Allee is a member of FFA and has participated in cheerleading, cross-country, basketball, fast-pitch softball, and track.

Allee has been an active  member of our local FFA chapter. She has attended many activities to further her role as a member and leader such as state convention, FFA camp, and banquets. She has showed her dedication and hardworking by showing pigs for FFA. She has spent hours working and training with her animals, which has required dedication and persistence.

Allee has earned many awards as a high school student including the letter W award in athletics, being a state qualifier on the opening and closing team, and earning the Greenhand award for Waurika FFA.

Allee continues to exhibit her work ethic by babysitting and working for Headrick Insurance Agency in the summer. Allee has also been a student on the Principal’s Honor Roll.

Aaron has been a member of FFA, Beta Club, and Student Council. He has participated in scholastic meets and the drama club play. Aaron has also been on many teams at WHS including cross-country, baseball, basketball, football, golf, track, and Academic Team.

Aaron has had many leadership roles including being a treasurer for FFA, president of his class, and quarterback of his high school football team.

As an active member of the FFA, Aaron has spent time planting flowers at the nursing home, helping elderly members of our community move furniture and volunteering at the Parker Ranch Bull Sale.

Aaron is also a hard worker outside of the classroom having worked at the Waurika Golf Course, Redstone Ranch, Price Cattle Co., and Colt Morrison Cattle Co.

Madison has been very active as a leader in her school. She has been an officer for the class every year, vice-president of FFA, vice-president of student council, and a captain for her basketball team. She has volunteered her time through these groups to participate in the angel tree and canned food drives.

Madison spends her time outside of the classroom remaining veery active. She has worked for the summer reading program at the Waurika Public Library, Eagletown Daycare and Waurika Quik Mart.

Emily is a very involved student at Waurika High School. She has been a member of the Academic team, Oklahoma honor society, FFA, gifted and talented program, student council, National  honor society, band cheerleading, cross-country, basketball, and track. She has also been involved in scholastic meets and the drama club play.

Emily has held many leadership roles at WHS including being a class officer, student council representative, FFA sentinel, FFA secretary, and Beta club secretary. She has developed her role as a leader by attending the FFA Made for Excellence conference, State and National FFA convention, FFA alumni camp and serving as a Hugh O’Bryan Youth Leadership representative.

Emily has received many awards such as being a state qualifier for the FFA opening/closing team, placing on the meat judging team, and division champion doe goat at the Jefferson County Livestock Show. she has received academic awards for animal science, algebra 1, and English 1. She was also a member of the district champions in basketball and received an excellence rating in the solo band contest. Emily has also received Leadership Training for Christ medals in bible bowl, teaching, and drama. Emily is a regular student on the principal’s honor roll and superintendent’s honor roll.

Emily has spent a vast amount of time volunteering in her community. She has worked the Church of Christ Golden Age Banquet, FFA Christmas Angel Tree, Benny G. Adkin’s Day, and on the Chris Kidd for Senate Campaign, among many other activities.

Emily also demonstrates her work ethic at the Eagletown Daycare in Waurika. She also spends her time outside of WHS, as an active member of the Waurika Church of Christ.

Kylie is an active member of Waurika High School. Kylie has been a member of the academic team, Oklahoma honor society, FFA, 4H, student council, and national honor society. She has been a strong member of many teams including cross-country, basketball, fast-pitch softball, and track. Kylie has also participated in the drama club play.

Kylie has held many leadership roles such as class officer, FFA officer, cross-country manager, school newspaper educator, and serving on the prom committee in her junior year.

Kylie has been the recipient of many awards. She has received awards for her yearbook articles, beef production, and article merit. Kylie also received an honorable mention in basketball and the letter W award in 3 sports.

Kylie dedicates her time outside of the classroom to volunteering and working in the community. Kylie has volunteered painting pens, working the Veterans Day program, the annual 5K run, back to school bash, canned food drives, hurricane Harvey relief effort, Christmas caroling, and serving Thanksgiving and Christmas dinners.

Dalee is a very active and dedicated member of Waurika High School. Dalee has been a member of the academic team, Oklahoma honor society, FFA, Student council, National Honor Society, cross-country, power-lifting, and track. She also performed in the drama club play.

Dalee has been a leader to her peers and held many leadership roles at WHS. She has been a student council representative, class officer, Waurika FFA Jr. Officer, National Honor Society president, beta club vice-president, FFA president, and editor of both the Eagle Yearbook and the Eagle Talk newspaper. She has also served as a member of the speech team and co-captain of the academic team.

Dalee has also participated at the state talent competition for both Beta Club and FFA. Dalee was an honorary junior last  year and will be valedictorian of her graduating class.

Dalee is very involved in Waurika Church of Christ. She attends camps and leadership conventions through her church, allowing her to be a role-model for the younger members of her church.

Karlee has served her peers as a leader in many different organizations. She has served as a treasurer for beta club, reporter for National Honor Society, vice-president for her senior class, and editor of the yearbook. Karlee has also volunteered her time at VBS and Sunday School, assisting younger children.

Karlee is a young adult with a very admirable work ethic. She took classes at Cameron University while being enrolled as a high school senior. She also works for the summer reading program at Waurika Public Library and at the Duncan AMC Movie theater while reaming a full time student.

Michael is a very dedicated student. He took a concurrent college course at Cameron University during the final semester of his senior year. Michael has attended many scholastic meets participating in music, pre-calculus, algebra 2, and government competitions.

Michael dedicates his time outside the classroom to volunteer throughout our community. He has participated in the annual community wide cleanup, the o youth summer baseball program, picked up trash in and around the school, and hauled dirt to level the new church land. Michael also serves as a fill-in teacher at Sunday School and usher for his church.

Seth has been a student at Waurika Public schools all of his life. Seth has been involved in FFA, Beta Club, Student Council, National honor Society, band, cross-country, basketball, football, golf, power-lifting, and track. Seth also took concurrent classes at Cameron University during his senior year while remaining an active student.

Seth has served as role model for his younger peers. He has done this through his leadership roles as a student council representative, class officer and captain of his football, golf, and basketball teams. He has also demonstrated his leadership through the volunteer work and community service he participates in. Some of these activities include community cleanup, summer reading program, Smithsonian server, church usher, hurricane Harvey relief effort, and gathering supplies for our alumni serving in the military.

Sam serves as a role-model to her peers and Waurika High School. She has served as president of Beta Club and her senior class, treasurer for National Honor Society, student council representative and captain of Waurika Cheer. Through these leadership roles, Sam has fulfilled the opportunity to volunteer for her school and community. She has participated as a public library volunteer, mentor for incoming 6th grace students, mentor at middle school cheer tryouts, leader for little eagle baseball camp, and a spokesperson for our local efforts to support the hurricane Harvey relief project.

Sam has earned many awards and honors. She has received FFA awards and 4H awards such as Junior, Intermediate, and Senior Swine Showmanship. Sam was the recipient of leadership awards of the highest honors such as the Hollis Dickey Leadership Award and the HOBY Leadership Conference Ambassador honor. She has received academic awards in physical science, biology, US History, Oklahoma history, anatomy, and the OSU Academic Excellence Scholarship. Samantha has also been homecoming queen and will serve as valedictorian of her senior class.

Samantha continues to display her work ethic outside of the classroom, working hard to receive her certification of veterinary assistant. She also works for Sam’s Show Pigs which she founded to breed, raise and sell show pigs. She currently works at Chisholm Trial Animal Hospital where she is gaining knowledge that will help serve her in her future career.

Braden displays a strong dedication to his academics. Braden spent the summer before  his senior year participating in Sooner Discover at the University of Oklahoma. This opportunity allowed him to take college courses while living on campus as a college student.