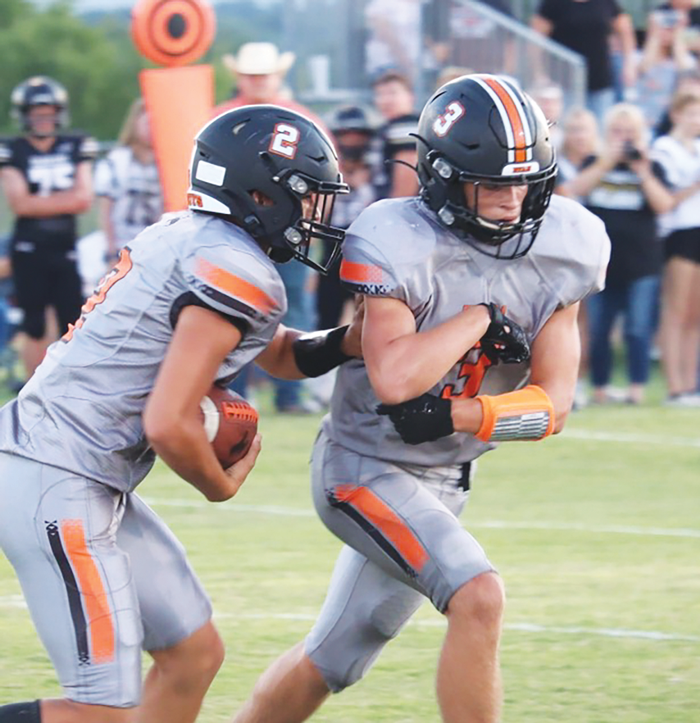 …Another Strong Second Half Propels Ryan to Win

Sparked by another excellent second half performance, the Ryan Cowboys came away with a dramatic 32-26 double overtime victory over Wilson at Bob Givens Sports Complex last Friday night.

Ryan will hit the road for the first time in 2022 on Friday when they travel to Central High. Kickoff for the non-district matchup with the Broncos is 7 p.m.

Central High is 2-1 on the year with wins over Grandfield and Bray-Doyle. The Bronchos fell to Tipton, 52-14 last Friday night.

It was a gritty performance by the Cowboys throughout last Friday’s game and unlike the first game of the season, the Cowboys played well in the first half despite going into the locker room with a 6-0 deficit.

The first half touchdown by the Eagles came on the first drive of the game.

Wilson returned the opening kickoff to midfield and it took the Eagles just four plays to cover the distance for the score. The run for the extra point was stopped short by Ryan’s Kyson Tomberlin, but Wilson had the early 6-0 lead with 10:49 remaining in the first quarter.

The two teams exchanged punts and then Ryan put together its first threat of the game on their next possession. The Cowboys drove from their own 30 to the Wilson 25, but a fourth down pass was broken up and Wilson took over on downs.

The Eagles promptly moved down to the Cowboy 16 where on a fourth and one Ryan’s Daylen Vandoozer stuffed the Wilson runner for no gain giving Ryan the ball near the end of the first quarter.

Defense reigned supreme for both squads in the second quarter, but late in the quarter Ryan drove to the Wilson 13.

Two Ryan penalties and an incomplete pass gave Ryan a fourth down at the Wilson 27 and Xavier Guzman’s pass was intercepted in the end zone and the Eagles returned the ball to the Ryan 19 with just 31 seconds left before intermission.

But, on the first play, Wilson fumbled and Foreman Casebolt recovered for Ryan giving the Cowboys the ball at the Wilson 16.

The Cowboys, however, could not take advantage and a fourth down pass fell incomplete as the half ended.

Just like a week ago, the Cowboys came out for the second half and drove the football for a score after the opening kickoff.

Casebolt returned the second half kickoff seven yards to give Ryan the ball at its own 35.

A nine-yard gain by Racen Williams and a four-yard pick up by Carsen Rodriguez gave Ryan a first down at the Cowboy 48.

On the next play, Williams raced around right end, hovering around the sideline and then cutting back to the middle and outran the Wilson defense for a 52-yard touchdown run. The try for two points failed, but Ryan had tied the score at 6-6 with 11:34 left in the third quarter.

A punt by Wilson and a turnover by Ryan gave Wilson possession at the Eagle 36.

It took the Eagles 11 plays to travel 64 yards for the go-ahead score.

Landon Richardson covered the final 13 yards for the score and the two-point conversion pass was broken up by Ryan’s Ethan Burden. The Eagles now had the lead, 12-6, with 2:26 remaining in the third quarter.

The Cowboys answered with an impressive drive of 60 yards in six plays. C. Rodiguez got the tying score on an 13-yard run. The pass for two points was incomplete, but the score was tied at 12-12 with just 11 seconds to play in the third quarter.

The two teams once again exchanged punts and at the 8:01 mark of the fourth quarter, Wilson took possession at its own 40.

After a three-yard loss, Wilson quarterback Collin Wharton found running back Jake Schiralli in the flat and he raced 63 yards to pay dirt. The pass for two points was incomplete, but the Eagles had moved in front, 18-12, with 6:54 left in the game.

On the next possession, the Cowboys turned the ball over on downs and Wilson got the ball with 4:17 left in the game. A 40-yard gain gave Wilson a first down at the Ryan 30 and the Eagles seemed poised to put the game away with another score.

But, after an incomplete pass, a pass for a loss of three yards and a four-yard gain, Wilson faced fourth and nine at the Ryan 29.

The Eagles went for the kill by throwing the ball, but it was picked off by Williams at the Ryan six and he returned it to the Wilson 38, but a Ryan penalty on the return brought the ball to the Ryan 39 after a penalty was assessed to Wilson for a late hit.

The play of the game might have come on first down for the Cowboys when Williams found C. Rodriguez downfield and the sophomore running back made a juggling catch as he fell to the ground, but it was good for a 24-yard pass completion at the Wilson 37.

Guzman picked up 14 yards for another first down moving the ball to the Wilson 23.

After a one-yard gain, Williams found Julian Rodriguez over the middle for a 21-yard pass completion down to the one with just 46 seconds remaining in the game.

The next three plays netted no yardage, but on fourth down C. Rodriguez bulled his way into the end zone for the tying score with just five seconds remaining in regulation.

The Cowboys had the opportunity to win the game with a successful two-point conversion, but the pass failed.

Wilson returned the ensuing kickoff to the Eagle 49, but time expired on the return to send the game into overtime.

Wilson won the toss and elected to play defense first on the west end of the field.

On Ryan’s first play, Williams found Will Townsend open in the end zone for the go-ahead score.

On the critical two-point conversion, Williams scrambled around threw into traffic to Guzman who made a clutch catch just inside the end zone to put Ryan in front, 26-18.

Wilson wasted no time in answering the Cowboy score as Wharton found tight end Cason Fulton wide open in the end zone for the touchdown. The Eagles tied the game with the two-point conversion pass from Wharton to Fulton again that sent the game into the second overtime.

The Eagles got the ball first in the second overtime and a first down pass was incomplete. On second down the Eagles were flagged for holding putting the ball back at the Ryan 20.

It took Ryan just three plays to get the winning score as C. Rodriguez broke outside and scored from one yard out to give the Cowboys the victory.

The Cowboy defense was impressive after the game-opening score by the Eagles as they came up with several key stops and three turnovers.

COWBOY CORRAL: This was the 10th overtime game played by Ryan in school history….The overtime game last Friday was the first extra period game played by Ryan since a double overtime victory over Waurika, 44-36, in 2017….Ryan is now 6-4 in overtime games since the rule was instituted in the 1975 season….The Cowboys are 4-0 in games that have gone two overtimes….Ryan is 2-0 in overtime games with Wilson….Ryan actually played in one of the first overtime games in Oklahoma during the 1975 season when Ryan defeated Temple, 6-0, in a pair of extra frames in the season opener….Ryan moves to 9-13 against Wilson in school history and 2-3 in games since Wilson began eight-man play a few years ago…The first meeting between these two schools came in 1920 – a 46-14 victory by the Cowboys…..The 32 points scored by the Cowboys against the Eagles is the most since Ryan scored 42 in a 42-8 victory in the 1970 season….The point total by the Cowboys is the third highest total in 22 meetings with Wilson….The 26 points by Wilson is the most in the series in an Eagle loss to Ryan….Ryan and Wilson went 39 years without playing each other from 1977 to 2016 – when Wilson moved to the eight-man ranks….Wilson is the largest eight-man school in the state according to the latest figures released by the Oklahoma Secondary Schools Activities Association…The last time the Cowboys were 2-0 to open a season was 2017, but it has happened only 21 times since Ryan began eight-man play in 1978….The Cowboys moved to sixth in the Class C rankings by the Tulsa World and that is the first time a Ryan team has been ranked since early in the 2014 season….The win over Wilson represents the first win over a Class B non-district foe when Ryan is playing in Class C since the 2013 season opener when Ryan downed Waurika, 44-26….A pair of former Waurika head football coaches were on opposite sides of the field last Friday night as Tony Roberts serves as an assistant at Ryan, while Glenn Howard is an assistant at Wilson.