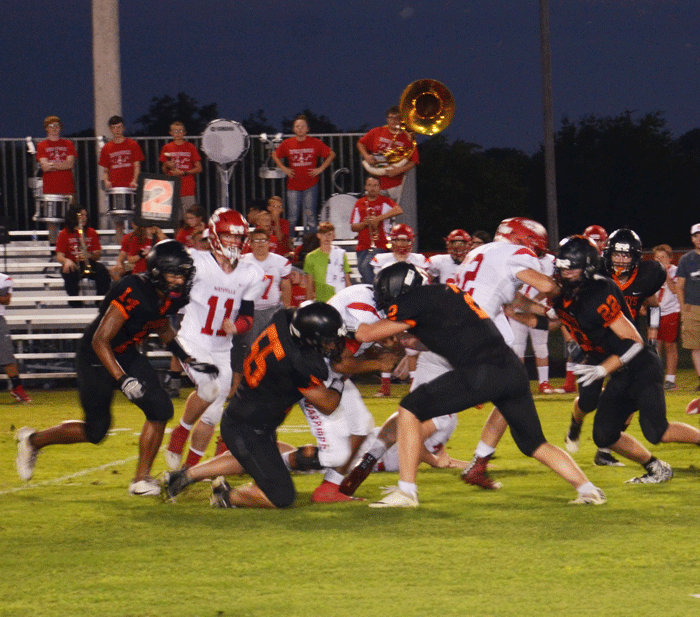 It was quite a show of offense last Friday night at Bob Givens Sports Complex by Ryan and Maysville.

It just did not result in a lot of points.

The Cowboys, however, had just enough firepower to record a 30-14 victory over the Warriors in Ryan’s homecoming game.

Now the Cowboys hit the road for the third time in four games as they travel to Caddo tomorrow night. Kickoff is set for 7:30 p.m. Caddo is 1-2 on the year.

The Cowboys rolled up 453 total yards in the game but turnovers and the inability to convert two-point conversions kept the Cowboys from lighting up the scoreboard.

The Cowboy defense came up with a few big plays to thwart a number of Maysville scoring threats to help Ryan earn its third victory of the season.

The Cowboys scored on their opening drive of the game marching 70 yards on seven plays. Skyler Parkhill covered the final four yards for the score. The two-point conversion failed, but Ryan held a 6-0 lead with 9:34 left in the first quarter.

Maysville threatened to answer the Cowboys’ score, but the Warriors’ drive bogged down after a delay of game penalty and a nine-yard loss on a quarterback sack by Parkhill on a fourth down play from the Ryan 28.

The Cowboys took over at their own 37 and it took Ryan only two plays to score. Parkhill picked up seven yards and then sophomore quarterback Grayson Tomberlin had a nifty 56-yard run for the score. The two-point conversion failed, but Ryan held a 12-0 advantage with 3:51 to play in the first period.

On the ensuing kickoff the Cowboys perfectly executed an onside kick as Andrew Villerreal combined to kick the ball and recover the onside kick giving Ryan possession at midfield.

It took Ryan seven plays to drive to the Maysville 33 and that is when the game’s momentum slipped from the grasp of the Cowboys. Talented Maysville quarterback and defensive back Gunner Aprill picked off an errant Tomberlin pass and returned the interception 41 yards to give Maysville possession at the Ryan 48.

The Warriors drove the ball deep into Ryan territory, but Tomberlin picked off a pass in the end zone to keep the Warriors off the scoreboard.

The Cowboys turned the ball back over the Warriors just two plays later on a mishandled exchange and this time Maysville took advantage. On the first play of the drive, Aprill scampered 24 yards for the touchdown and also ran for the two points to cut Ryan’s lead to 12-8 with 7:30 left in the first half.

Ryan answered the score with a seven-play, 63-yard scoring drive. The big play of the drive was a 42-yard completion to Parkhill that gave the Cowboys a first-and-goal at the Warrior seven.

After a loss and a 10-yard penalty, Kalen Weldon picked up 16 yards on a counter and then Tomberlin found Parkhill across the middle of the end zone for a four-yard touchdown pass. Again the Cowboys failed to convert the two-point try, but led 18-8 with 3:33 left before intermission.

Maysville answered the Cowboy score quickly. A 25-yard kickoff return put the Warriors in business at the Ryan 45 and in just three plays went the distance for the score. Aprill found Damon McCallister behind the Cowboy defense for a 47-yard touchdown pass. The try for two failed, but with 2:02 left before the half the Warriors had trimmed the lead to 18-14.

The Cowboys threatened to score again by driving to the Maysville 25, but the Warriors intercepted another pass in the end zone to turn back the Cowboys and the half ended with Maysville running out the remaining seconds.

On Maysville’s opening drive of the second half Aprill took the Warriors from their own 36 to the Ryan 32 as he carried the ball on every play with the exception of one pass incompletion. Ryan stopped the Warriors on fourth down and took the ball over on downs.

The Cowboys took 11 plays to move 72 yards with Weldon’s key 21-yard spectacular catch keeping the drive alive on a fourth down. Parkhill went around left end for the final 12 yards and Ryan held a 24-14 lead with 4:03 left in the third quarter.

Maysville went on another long drive and moved the ball to the Ryan 23, but on fourth down Villerreal chased down Aprill for a six-yard loss that gave the Cowboys the ball on downs.

On the third play of the drive Tomberlin found Parkhill open on the left side and after the Cowboy senior dodged a couple of tacklers, he sprinted 71 yards for the score with 9:00 left in the game. The run for two points failed again, but Ryan was in front, 30-14.

Two of Maysville’s final three drives resulted in the Cowboy defense getting key stops on fourth downs to help preserve the victory.

Tomberlin and Parkhill accounted for most of the 453 total yards on offense for the Cowboys.

Parkhill set the school record for most yards receiving in a game with 189 yards on just seven receptions. He also rushed six times for 30 yards.

Tomberlin finished with 151 yards rushing on 19 carries. He was 12 of 20 passing for 249 yards, but he did have three interceptions.

On defense, Tomberlin and Parkhill played big roles. Tomberlin was in on 17 tackles on the night, while Parkhill added nine stops. Villerreal, who had 11 tackles, and Parkhill put pressure on the Maysville quarterback much of the night.

COWBOY CORRAL: The win broke a two-game losing streak in homecoming games for Ryan not including last year’s homecoming game with Grandfield which Ryan won by forfeit…..Ryan now leads the short series with Maysville, 4-2….This was the first meeting between the two schools in an eight-man game….The last time Ryan played Maysville was in 1975 with the Cowboys coming away with a 9-6 victory….Tomberlin’s passing performance was the sixth most yards passing by a quarterback in school history….It was also the sixth most passing yards by a Cowboy team in school history….The 12 receptions in the game ties for the ninth most in a single game in school history along with the 12 receptions in a 1940 contest with Grandfield…The 30 points scored by Ryan is the second most in the series with Maysville just behind the 34 points scored in a 34-0 victory by the 1974 squad….The 1988 Ryan Cowboys, the first Ryan football team to play for a state title, were introduced at halftime along with coaches Phil Elerick and Gordon Garner.