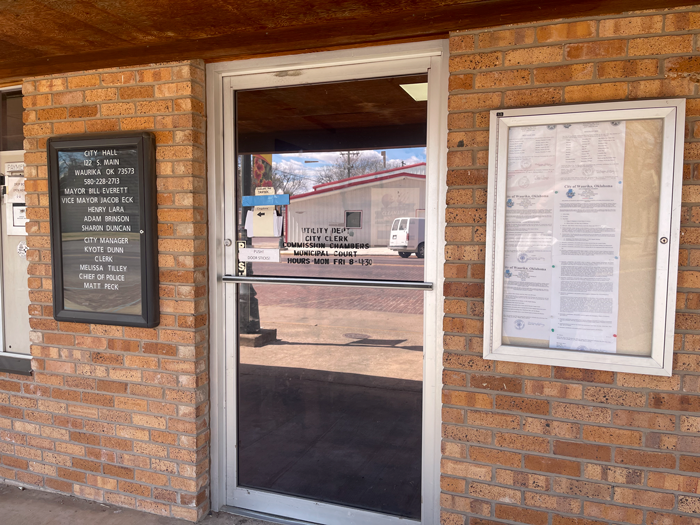 Kristina Torres is a Waurika Native who has lived here all her life and has a vested interest in the success of Waurika. She feels the city is going in a good direction and doesn’t want it to lose any momentum. She says Waurika is a beautiful town. “We have a great community that has always been supportive of one another.

Torres graduated from Waurika in 2007 as class valedictorian.

She began working for the Waurika Ambulance Service in 2016. Torres is a paramedic, a vocation inspired by her mom.

Torres is very active within the community. Currently she is helping coach Girls on the Run. Recently she spoke at the Wish Task Force Career Fair held for Waurika students. As part of the task force she is very active in helping adults achieve career success.

Her goal is to do what it takes to help Waurika grow and prosper. She wants to see more activities for children, young people and senior adults. She says she is eager hear citizen’s concerns, and issues.

Being a first responder, Torres wants to see the Fire Department and emergency services have all the resources they need to keep local citizens safe.

She also wants to improve the cities infrastructure along with the continued efforts to improve Waurika’s parks.

Jerry Wallace started life in Love county and moved to Addington when he was in the seventh grade. Wallace says he was raised by the “best mother in the world”. She raised eleven kids in her family. All six boys ended up with Master’s Degrees. Wallace graduated high school from Addington and went on the earn a Master’s Degree in Criminal Justice from Sam Houston State University out of Hunstville, Texas. Before that he earned his Bachelor’s Degree in Psychology and Sociology from Central State University.

“I believe I’m qualified to deal with people and listen to people. That’s what I want to do, listen to the people of this town. I’ve dedicated lots of work to the city. I’ve cleaned up the property of many of the houses they have torn down. I’ve mowed the ditches along the streets for them. I love to work and I love to help people.”

Over the past 18 years he has been a part of the Baptist Disaster Team. They go all over the country to assist with cleaning up and helping those who have experienced a catastrophe (flood, tornado, hurricane, etc). Last year he was deployed 12 times and this year he has already been deployed twice. It’s purely a labor of love. It’s completely voluntary. He says his reward is simply helping people.

He retired in 1980 from the Drug Enforcement Administration. He had served 12 years overseas in various countries including Iran.

He was working in Iran when the embassy was overtaken and the hostage crisis began.  During his years of service he traveled to 45 countries. “God has really blessed me,” he says.

Wallace says he was Mayor of Waurika for six years during the 1980s. Since then he has kept up with the goings on of Waurika.

He currently feels Waurika is spending too much money for a small town. As an example, he states he attended a city commissioner meeting where they were wanting to buy a $54,000.00 police car. When he asked if he could address the issue he says they would only allow him to speak for three minutes (Note: All citizens allowed to address the commissioners during citizen input are only given three minutes to speak.) Wallace, said, “I think that is horrendous when they do that. I feel like the council we have today thinks this city is their’s and the money they have is their’s. I see this as the people’s money. They keep taxing us. Every six months they raise the water rates.”

Referring back to the purchase of the police car he said he attempted to keep them from doing that because they could have purchased one $25,000.00 cheeper. He said they laughed at him.

He also cited the purchase of the new central air unit for the Presbyterian Church, which he says is only used one time per year yet they spent $12.000.00 on the unit. “I thought that was ridiculous,” he said.

Later, Wallace said the city “transferred a million dollars from a checking account to a CD and then raised the utility rates 2.5%. Wallace goes on to say that “the average income for the whole town is $36.000.00 per family.” He says the people in town can’t afford to pay the utility rates we have. Wallace says Waurika’s utility rates are the highest in the state according to his research. He says, “Comanche’s minimum utility bill is $36.00. Waurika’s is around $100.00.” Wallace said in Ryan the citizens get water and electric for around $100 per month.

“We’ve got to improve. We’ve got to have people in there who care about this town. They are the ones we serve. I just feel like if I don’t stand up for what I believe I won’t have a right to complain.”

“That’s why I am running for city council. I know I can’t do it by myself but maybe I can convince two other ones to go along with me. I just want to leave the town better than I found it.”

“The things that really get me is a year ago they bought five new pickups for the street, water and utility department. Our city limits only go a quarter mile south and a half mile east and a half mile west and people live two miles out on highway five. They sold pickups that were only 15 years old that people are still driving today hauling wood to Wichita Falls. We don’t have to have the best of everything here. It’s all about taxing the people of this town. I can’t see how anyone can pay a $130 -$140 utility bill to the city while living in the housing. That doesn’t include their electricity.”

“The City council thinks this town belongs to them and I can’t stand it. It’s not their town. We pay for everything they do.”

Wallace went on to discuss the ladder truck used by the Waurika Fire Department, “Having a ladder truck on the fire department for $200,000 that the people are having to pay for when we’ve used it two times in the last two years we’ve had it. One was to get a cat out of the tree and the other was in a parade. Do we need it? I don’t think the people need it. The only people who pay for it are property owners. It was a bond and the city council approved it. They can stop expenditures like that if they would just stop and think about the people. I feel for the poor people and feel for the people having financial trouble. I’m going to try to do something about it. I don’t know if one person can start it and get it going but we did in the 1980s. I’m still in good enough health to get in there and fight a good battle. I’ll be working for the people not for city council. I will not go along with anything that cost the people more.