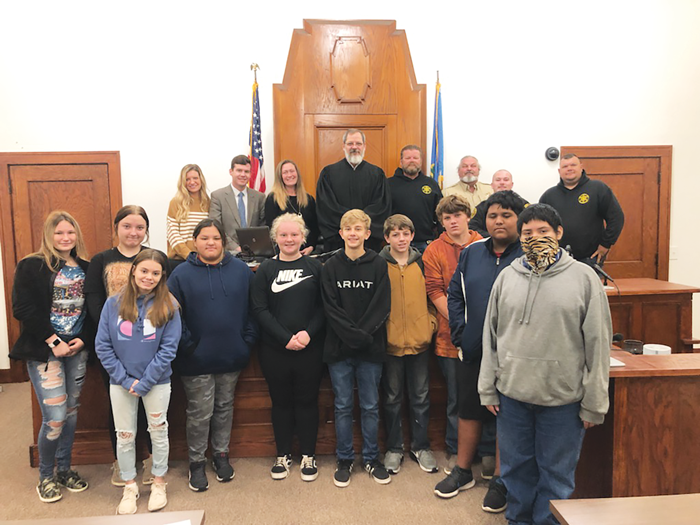 Judge Dennis Gay hosted the group by putting on a “mocked up” preliminary hearing of a criminal case.  Judge Gay assembled a team just like you would see in the Courtroom during a hearing. Local attorneys Andrew Benedict, Missy Benedict and Jamie Phipps assisted Sheriff Jeremy Wilson, Undersheriff Jimmy Williams deputies Phillip Wolfenbarger and Derrick Durbin playing the roles that would be seen in a real court setting.  During the “hearing” attorneys presented their case for Judge Gay just as they would in a real hearing.

After the completion of the hearing all of the participants fielded questions from the students about their experiences being a part of the judicial system.  Judge Gay noted that while many of the reasons someone should have to come to court are negative, there are some really good things that happen in court such as marriages and adoptions.  When the group was asked about their career path choices the whole panel agreed that their career choices in the legal and law enforcement fields comes from a desire to help others.

Visiting the courtroom was only half the trip.  The students were dismissed from court and went downstairs for a tour of the Jefferson County Jail.  Sheriff Wilson and Undersheriff Williams walked the students around the facility and explained the procedures and processes that the Sheriff and his deputies work through when bringing and managing inmates.  The trip to the jail was completed with a trip to the dispatch and communications center.

Civics and History teacher Bret Foster stated “I really appreciate everyone at the courthouse for taking time out of their day to talk with our students.  I can teach them from a book how our system works but it really sinks in when they get to observe first hand.”  Eight grade student Wrangler Wickware noted that “the trip was a lot of fun, it was neat to really see how a judge and attorneys did their jobs.”