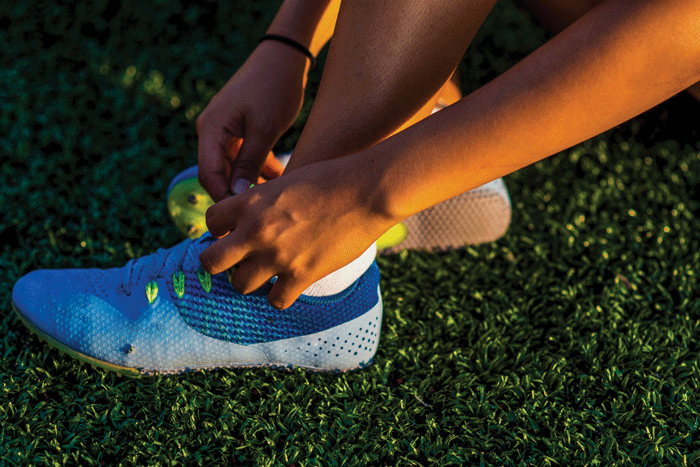 In a year when nothing is normal, all-state honors for track took on a different look for the 2020 season.

With much of the season canceled including the regional and state track meets, the Oklahoma Track Coaches Association developed a process where athletes from the six classes of track were selected for all-state status.

Four of those athletes came from Jefferson County schools – three at Waurika and one at Ryan.

Sara Ballard, Nic Alvarado and Turner Mora are the three all-staters from Waurika and Juliet Spangler is the all-state selection from Ryan.

The Oklahoma Track Coaches Association took nominations from coaches for all-state honors and the best performances from the 2019 season were taken into account. Only seniors were selected for all-state for the 2020 season.

Normally, the winners of each event in each class at the state track meet are given all-state status in track.

Less than a dozen student-athletes from each class were selected for the elite honor and in Class A – which Ryan and Waurika are classified for outdoor track – eight girls and 11 boys were named to the squad.

Spangler has been an integral part of the Cowgirl track program for the past four years. A promising senior season opened with Spangler winning the 1,600 meters and finishing second in the 3,200 meters. She was part of the gold-medal winning 1,600-meter and 3,200-meter relay teams in the only meet this past spring.

The former Cowgirl, who will be taking her talents to Cowley County Junior College in Kansas to play basketball, holds the third best time in school history in the 1,600 and 3,200 meters.

Spangler also won a total of 27 silver medals and 11 bronze medals. She placed in events – meaning fourth through sixth place – a total of 21 times.

Spangler’s dad, Steve, served as her coach in track, cross country and basketball all four years of her high school career.

Ballard has been a mainstay for the Lady Eagles in cross country and track, however, her senior season was cut short by an injury.

The 2020 Waurika graduate excelled in the long jump for Coach Joe Masoner’s Lady Eagle thinclads. In her career she won the event once, finished second on two occasions and was third three times.

Ballard also placed a total of eight times in the long jump in three seasons.

In the 100 meters, Ballard won two bronze medals and placed five other times. She also scored in the 200 meters and the high jump in meets.

Alvarado was a consistent performer for coach Roger Jessie’s Eagle thinclads in his four seasons competing in the sport.

In Alvarado’s career, the outstanding three-sport athlete was a key participant in the 800-meter relay that saw great success for the Eagles.

He helped lead the squad to four gold-medal finishes – including a regional title – and four runner up finishes.

He helped Waurika earn a bronze medal in the event during his career and helped the squad place in three other meets.

Alvarado was also part of the 400-meter relay that claimed two meet titles, one silver-medal finish and two bronze medal performances in his career. Results from his freshman season and his participation in the relays was not available.

Mora comes from a legacy of athletic prowess at Waurika. His older brother Turner, his sisters, Tara and Tatum and his dad Guy preceded Turner on the oval. And, his younger sister, Tallin, still has two more years to continue the family’s tradition of athletic excellence.

The four-sport athlete has enjoyed not only a stellar track career at Waurika, but also a tremendous football career as the starting quarterback for the Eagles. Turner was the player-of-the-year in Waurika’s football district this past season and helped lead the Eagles to a 21-3 mark the past two years including two district titles.

Mora’s track accomplishments are many over the past four years.

In the only meet in 2020 at Velma-Alma, Mora led the Eagles’ 800-meter relay team to a third place finish and was part of the 1,600-meter relay that notched fourth place. He was also fourth in the long jump.

In four years in just the 1,600-meter relay, Mora was part of at least nine meet titles, three silver medals and one bronze medal. Mora was part of the squad that placed four other times. Some of the results from his freshman seasons were not available.

Mora was also part of all the other relays at one time or another, but the most frequent participation came in the 800-meter relay. Mora helped the Eagles to four gold medals in the event, along with three silver medals and two bronze medal finishes. He was part of helping the Eagles place in the event three other times.

Individually, Mora competed in the long jump and 400 meters for the Eagles. He holds five gold medal finishes in the 400 meters along with one runner up finish and four bronze medals. He also placed one other time. In the long jump, Mora acquired two silver medals and placed in four other meets.

Mora and Alvarado were also part of the Coach Jessie’s Eagle track squad that won the 2017 Class A Regional Track Meet. Both were also part of the 2019 Eagle team that finished second at the Class A regional. The two competitors helped the Eagles secure the meet title in the Waurika 8-Man Invitational all three years of their careers.

Boise City had four members of the Class A all-state squads making Cimarron County and Jefferson County the only two counties in the state with four all-state track athletes from the Class A list.