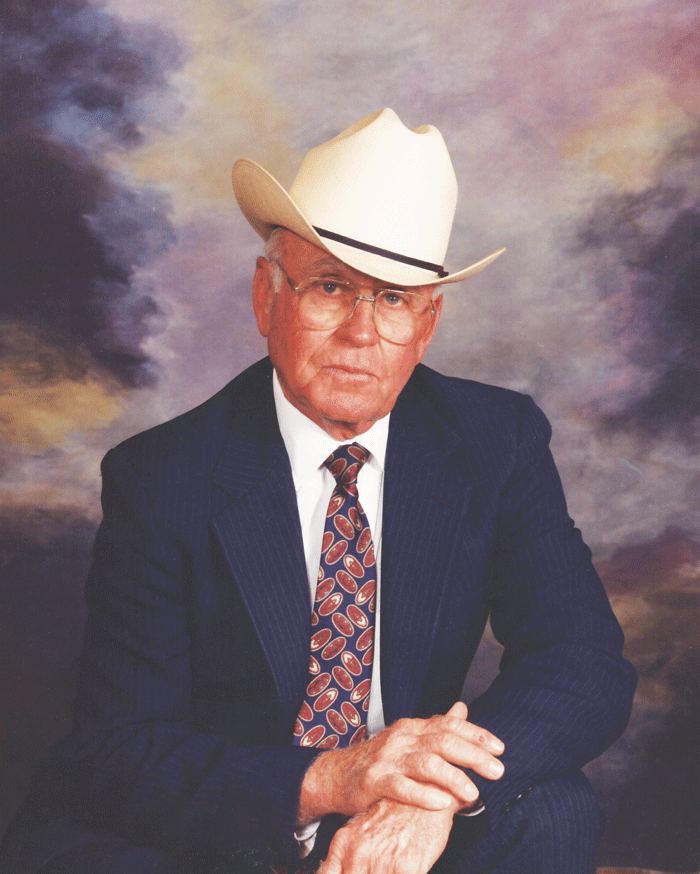 You might expect when a sports writer is asked to write a tribute to someone the focus would be on that person’s accomplishments as a coach or player.

But, this article will be focused more on the person than his accomplishments.

Most anyone that has been under the instruction of Mr. West would probably choose to focus on the man because

his contribution to the lives of people went far beyond the football field, basketball court or baseball diamond if they were tasked with writing a tribute.

As Bro. Mark Kunkel, pastor of the First Baptist Church of Terral, said numerous times while conducting the service, everyone was mostly there to honor the man Mr. West and not Coach West.

However, well over half the crowd identified themselves at one point in the service as having been coached by Coach West.

And certainly his coaching ability is not to be overlooked, but each person who has come under the influence of Mr. West would probably be quick to agree with Bro. Kunkel and this writer that his greatest achievements were what he poured into our lives.

You see the goal of Mr. West was not really to produce great athletes – although that did happen. His goal was to prepare high school students for life.

And, for the most part he was a master at teaching life lessons.

Mr. West was tough. He was a disciplinarian. However, he correctly knew that making life a bit difficult in the athletic arena would serve each person well when they began to tackle life as a young adult.

And, some of those lessons not only served us well as young adults, but throughout our life time.

As was noted in the funeral service, Mr. West cared deeply for people. He endeared himself to most every athlete he ever coached and those he taught.

The compassion Mr. West had for people carried over to his retirement years as he served people through his church and was frequently present when a need had to be met in the community.

Everything Mr. West did was with great passion – his family, ranching, teaching and coaching.

Mr. West’s accomplishments in the coaching profession should not go without mention. He was inducted into the Oklahoma Girls Basketball Coaches Hall of Fame in 1988. Most everyone knows he coached the 1965 Cowgirl squad that won the Class B state championship – the only state title in school history. He coached the Cowgirls for a total of 13 seasons.

Mr. West’s contributions to the football program are more notable than most people might think. He coached football on three different occasions – in 1958, 1962-1963 and 1977-1980. The 1962 squad just missed out on a district title and finished 8-2 which tied the 1929 football team for the second most wins in a season up to that time.

It is likely that one of the key decisions made by Mr. West while serving as principal and head football coach at Ryan was moving from 11-man football to eight-man football following the 1977 season. The decision probably saved the football program and he coached the Cowboys to the playoffs in the first year of eight-man football.

No tribute, however, would be complete without personal stories because Mr. West had a profound impact on my life.

Late during my eighth-grade year and Mr. West’s first year back at Ryan after having coached at Burkburnett, Texas and Duncan, he noticed right away that my athletic genes were just about non-existent.

Mr. West came to me and asked me if I would be interested in being the student trainer, which I did after football season that year. He sent me that following summer by bus to Baylor University to attend the National Athletic Trainers Association annual convention.

I was definitely way out of my league (can you imagine a kid who just completed eighth grade going on a trip like that alone?), but I learned a few things and spent the rest of my high school days helping with all sports. Mr. West saw potential in me that I did not see in myself and giving me that responsibility helped me stay connected to sports.

As you can imagine we spent a lot of time together during basketball practices. During that time I learned a lot about basketball, but did not fail to pick up one or two life lessons along the way.

One of those came one afternoon after Ryan had suffered a loss in a game that was not well-officiated. And, as I have a tendency to do even today, I was griping about how poorly the officials called the game the night before.

I suppose Mr. West had heard enough and he looked at me and said, “You worry about the things you have control over. We have no control over the officiating.”

That little tidbit has remained with me through the years and has been invaluable in my life’s journey.

In the years following whenever I would make my way to Ryan I would try to make sure I came in contact with Mr. West.

A side note – most anyone coached by Mr. West were all afraid to ever call him anything but Mr. West or Coach West. It was always difficult to address him as “Raymon.” But, that is the kind of respect he commanded and deserved.

Many others and in particular his family could share similar stories about how Mr. West impacted their lives. I am just fortunate I had the opportunity to be the one to write this article.

I believe it is pretty easy to come to one conclusion – there will never be another Raymon West.