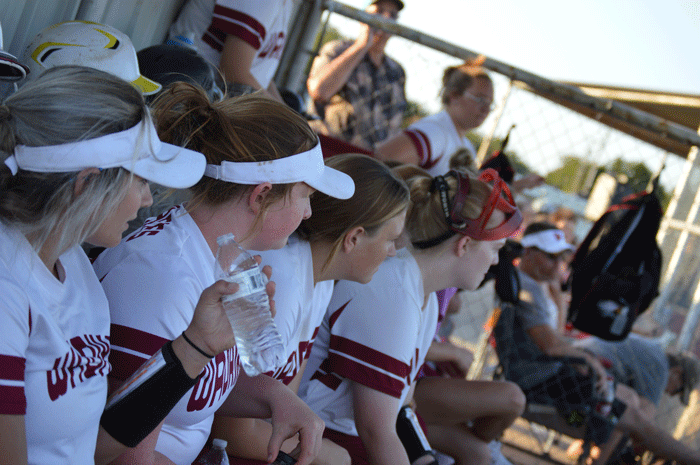 Waurika’s fast-pitch softball team hit the road Monday and Tuesday for contests at Wilson and Ringling and the road was not kind to the Lady Eagles.

Tuesday at Ringling the Lady Eagles fell to the Lady Blue Devils, 11-1.

On Monday, Waurika dropped a 9-1 decision at Wilson.

The Lady Eagles will be back in action today (Thursday) when they host Temple and Fletcher.

Waurika travels to Temple on Saturday for the weather-shortened Temple Invitational Tournament.

The Lady Eagles will battle Ft. Cobb-Broxton in the first round of the now single elimination tournament. The first pitch is slated for 12:45 p.m.

If Waurika wins, they will meet the winner of the Grandfield and Bray-Doyle matchup at 3:15 p.m.

The championship game is scheduled for 4:30 p.m.

Waurika closes out its regular season on Monday by hosting Velma-Alma.

One week from today (September 24) the Lady Eagles will compete in the Class A District Tournament at Snyder.

Pairings for the district tournament were not available for this week’s paper.

In Tuesday’s action, Ringling struck for nine runs in the first three innings and Waurika could not rally.

In the bottom of the first the Lady Blue Devils used a pair of walks, five stolen bases, two doubles and a triple to produce the four runs – all after two were out.

Ringling added to the lead in the bottom of the second with the benefit of three Waurika errors in the inning and only one hit. Ringling scored two runs to increase the lead to 6-0.

In the top of the third, the Lady Eagles finally got something going with a lead-off double by Grace Hill. She scored on Aubree Showalter’s ground out to narrow the gap to 6-1.

Ringling added three more runs in the bottom of the third on five hits and one error to move in front, 9-1.

The Lady Blue Devils added another run in the bottom of the fourth to end the game by the run rule.

Gracie Walling was 2-for-2 to lead Waurika at the plate.

In Monday’s loss to Wilson, the Lady Eagles had trouble getting that key base hit.

Wilson put up four runs in the bottom of the first inning with four hits – including two doubles and a triple – and one Waurika error.

In the bottom of the second inning Wilson added to the lead with an RBI-double to increase the margin to 5-0.

Waurika got its only run in the top of the third inning. Showalter reached on a fielder’s choice and advanced to third on a ground out and a single by Landry Forsyth. Showalter scored by stealing home plate to cut the lead to 5-1.

Wilson added a single run in the bottom of the fourth with the aid of another Waurika miscue and the lead stood at 6-1.

In the bottom of the fifth inning, Wilson struck for three runs on two Waurika errors, a hit batter, a single and a double. This ended the game by the run rule.

Riley Howell was 2-for-2 in the game for the Lady Eagles.