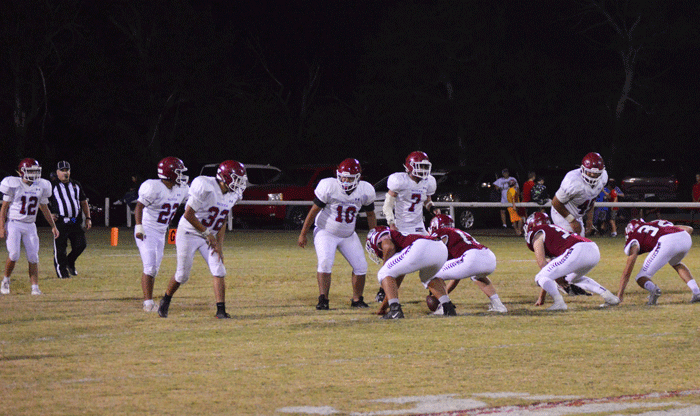 The task of facing the top-ranked team in Class B proved to be a bit too challenging for the Waurika Eagles at Shattuck last Friday.

The Indians used a big second quarter to garner a 56-14 victory over the Eagles.

Waurika, 1-2, will return home tomorrow night (Friday) for a homecoming battle with Canton. Kickoff is set for 7 p.m. at Cy Sloan Stadium.

Homecoming activities will be held before the game.

Canton will bring a 3-1 record to Waurika and the Tigers suffered their initial loss of the season last Friday in a 44-28 loss to Ringwood.

Shattuck’s quarterback, Samuel Long, was a thorn in the side of the Waurika defense all night.

The senior quarterback ran for three touchdowns and threw for another score and converted four two-point conversions for the Indians. Long finished with 167 yards rushing on 18 carries.

Waurika hung tough with the defending Class B state champions as the Indians held only an 8-0 lead after the first quarter on Long’s four-yard run and two-point conversion with just 59 seconds left in the first quarter.

But the Indians dominated the second quart with three scores and three two-point conversions to hold a commanding 32-0 advantage at the intermission.

Shattuck added to the lead in the third quarter with another scoring run from Long – this time a 30-yard scamper – and Caden Laverty ran for the two points to increase the lead to 40-0 with 7:53 left in the game.

Waurika answered with its first score of the night as Treyton Torrez scored from one yard out. The two-point conversion failed and with 4:12 left in the third quarter the Eagles still trailed, 40-6.

Shattuck scored on the first play of the fourth quarter and was successful on the two-point conversion to increase the margin to 48-6 with 11:56 to play in the game.

Waurika kept the game alive with a score. Torrez scored from six yards out and also ran for the two-point conversion but the Eagles still trailed, 48-14, with only 8:44 left in the game.

Shattuck tacked on another score with only 2:26 left in the game.

The game ended with Waurika in Shattuck territory.

The Eagles did have 263 yards rushing on the night, but the Indians rushed for 355 yards and had 75 yards passing in the victory.

EAGLE FLIGHTS: Shattuck and Waurika both have one win in the two-game series with Waurika’s victory coming in a 1988 playoff game….Shattuck’s win over Waurika increased its winning streak to 44 straight games….The last time Shattuck lost was in October of 2017….The last time the Eagles started a season at 1-2 was in 2014 when they won the season opener against Ryan and lost to Maud and Maysville in back-to-back weeks….This marks the first time under head coach Joe Allen the Eagles have lost two games during the regular season….Both of the Waurika losses have come to a pair of the top programs in Class B.