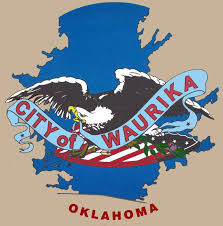 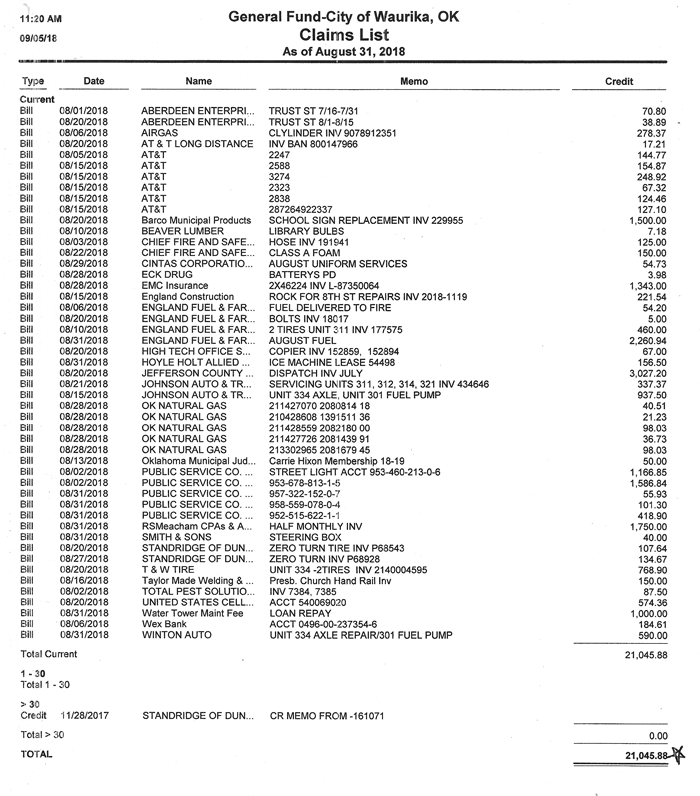 The 7.5% increase in water may not be popular, but according the City Commissioners it’s necessary to keep the books balanced.

In other business the commissioners opened the floor for discussion about the budget for the 2018-19 fiscal year.

There had been some questions about the way the categories were identified within the budget. The explanation was that all city councils across the nation must layout their budget in six categories using Governmental Accounting Standards.

Oklahoma is the only state that does not allow cities to levy ad valorem taxes without a vote of the people.

Therefore cities are limited on how they can raise money.

The budget is a conservative one. The city is anticipating lower revenues. 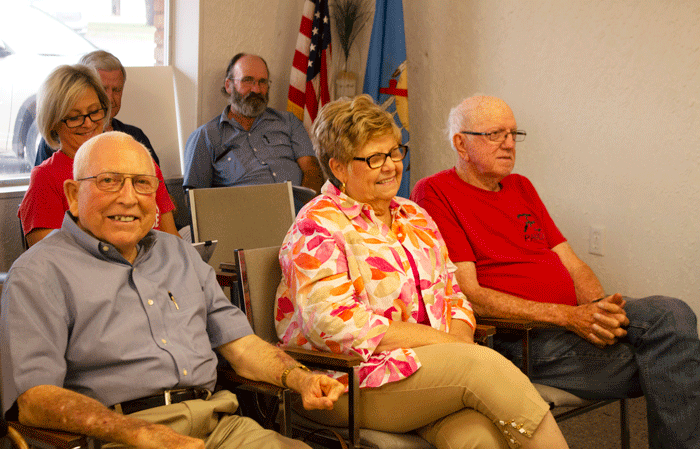 As far as expenses are concerned, it is anticipated that the city may incur $92,000 more in expenses than last year.

RS Meacham (the accounting firm Waurika uses) explained that none of the municipalities that they work with comparable to the size of Waurika are able to support themselves from their sales and use taxes alone and must make up the balance through their water revenue. Thus the increase in water rates.

In other business, the city renewed their agreement with RS Meacham and Associates for monthly accounting, payroll and bookkeeping services.

The council also renewed the lease agreement with A&A WindPros Inc. for the former Elliott’s building for one year at $500 per month/$6000 annually.

Purchase Orders and Claims for the General Fund in the amount of $19,315.30 were approved.

Purchase Orders and Claims for the WPWA in the amount of $46,545.83 were approved. 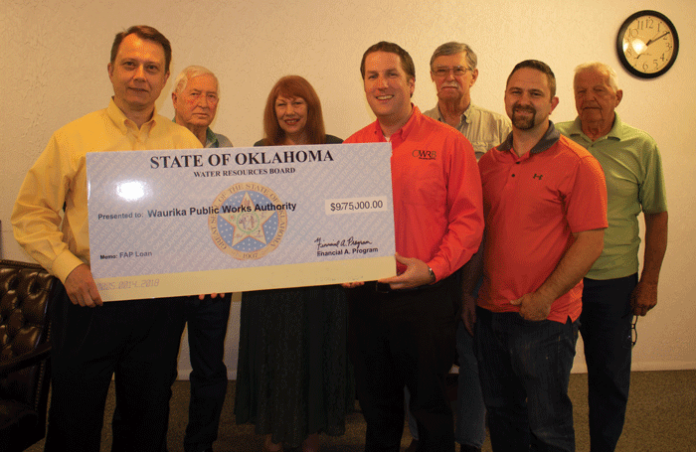 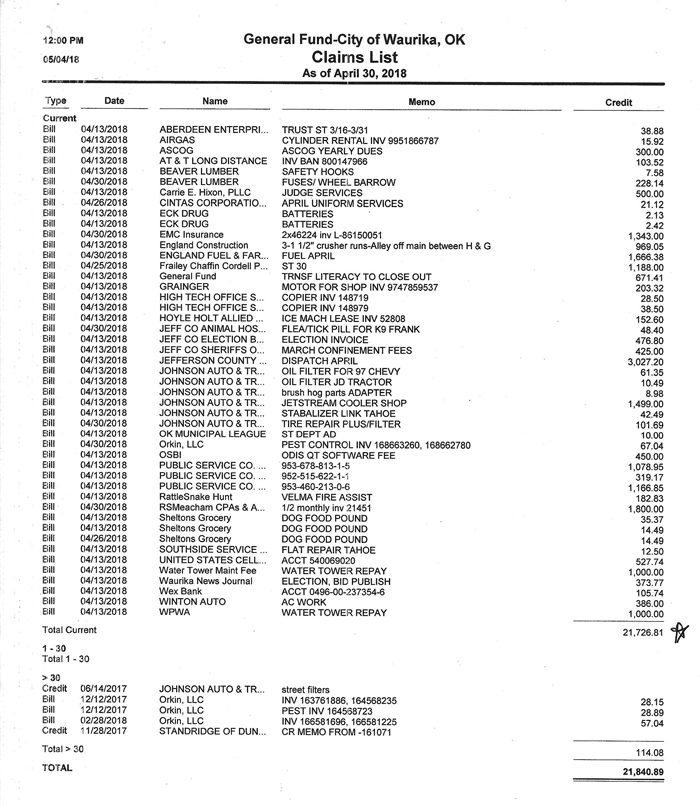 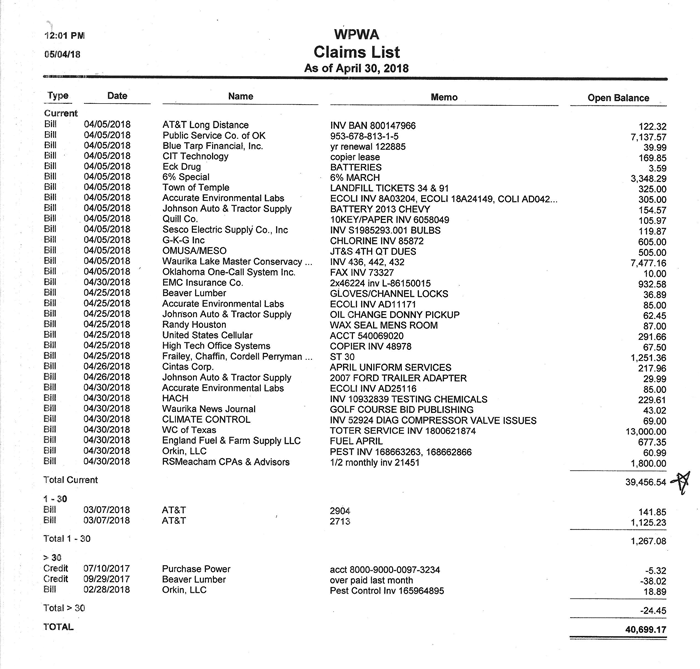 The deadline for filing for office in this year’s elections was this past Friday afternoon at 5pm.

Four filed for seats on the Waurika City Commission.

Two of those candidates Jacob Eck and Henry Lara are seeking re-election. Eck and Lara both drew opponents.

Also filing for a seat on the Waurika City Commission are James Terry and Rickey Porterfield.

In the race for county commissioner Rickey Martin drew two opponents. Rickey will be running for re-election against Kenneth Blevins and Macey Lovett.

Bryce Bohot did not draw an opponent in his bid for re-election as a commissioner in District 1.

Nobody filed to run against Sandra Watkins for the office of County Assessor.

Emily Follis will also run unopposed for her re-election bid for the office of County Treasurer.

State Rep. Marcus McEntire will return to his seat in the Oklahoma House of Representatives, Dist. 50, without having to face a challenger.

We need groups to volunteer their time cleaning up residential areas including limb and debris removal tree trimming, mowing, etc. Any equipment such as trailers, mowers, weed eaters, etc would be a tremendous help. We will supply work gloves, trash bags, bottled water and work vests.

Earth Day is a perfect chance to get out and put a little love into your town!

We need groups to volunteer their time cleaning up residential areas including limb and debris removal tree trimming, mowing, etc. Any equipment such as trailers, mowers, weed eaters, etc would be a tremendous help. We will supply work gloves, trash bags, bottled water and work vests.

Earth Day is a perfect chance to get out and put a little love into your town!

Several Citizens attended the meeting at the Waurika Depot Thursday evening to find out more information about Tuesday’s Bond Election.

The Bond Election will decide if citizen’s of Waurika want to pass the bond that will allow the Waurika Fire Department to purchase much needed fire equipment and vehicles.

Some of the items to be purchased will include a ladder truck, six storm shelters, battery backup sirens, a rescue truck, jaws of life.

There are several reasons for needing a ladder truck. One is the courthouse. If there was a fire in the courthouse we currently do not have a truck with a ladder that could reach the third floor. Also, there is about to be a major expansion at the Jefferson County Hospital that a ladder truck would be needed to fight any fire that may occur at that facility. The other reason is the safety of the volunteer fire fighters. Currently, they have to sometimes be on the roofs of houses that are on fire. The ladder truck would enable them to fight the fire without having to stand on the burning building’s roof.

The addition of the new storm shelters would be very beneficial. Currently, students at the high school can not use the locker rooms as a storm shelter because of the gas lines.

The new sirens will have a battery backup that will be essential if the power goes out during a storm or tornado.

Rick Smith, owner of Municipal Finance Services,  was on hand to talk about the bond and how it will affect citizen’s property taxes.

He has worked with the City of Waurika for over 20 years. He helped facilitate the Bond approved in 2004 in the amount of $320,000.00. That bond is about to expire so the new bond will just replace the 2004 one. In other words the bond will not be an additional tax as much as it will be replacing the expiring one.

Smith said during his presentation that another bond was the best route for Waurika.

If the bond passes, tax payers shouldn’t see much difference in their property taxes.

Smith says that even though the new bond is for more money, $450,000.00, it should be approved at a lower interest rate.

What will it cost tax payers?

The bonds will be bid on by various banks including those in Waurika. If one of the local banks win the bid, it would be beneficial to the community.

Nobody likes to think about fires, especially property and structure fires. However, if and when they happen it helps to be more than prepared and have the essential equipment needed to but the fires out quickly and safely.

The Waurika Chamber of Commerce will hold their annual banquet on Saturday, February 24th at the Waurika High School Cafeteria beginning at 6:30 pm.

Tickets are on sale now for only $15.00 each and can be purchased at First Farmers Bank in Waurika.

Catering the food this year will be the Duncan Regional Hospital.

Bill Roberson and his band Southern Rain will be the featured guest providing entertainment for the evening. Joining them will be Missy Fry.

On Monday February 12 , The Waurika Development Trust invited a group of local residents to discuss ways we could make Waurika a more attractive place to live.  The group will take the discussion to various clubs and organizations over the next several months for input and will report back to the Trust with a recommended plan of action. Craig Williams from Williams Landscape in Lawton was invited to talk about his suggestions for some improvements the group could do now that would make an impact and also provided some ideas for longer-term and larger improvements.

Jacob Eck and Lauren Nitschke represented the Waurika Chamber of Commerce to discuss a grant application they are preparing that would bring a group of architecture students from OU to Waurika to make recommendations for longer-term improvements to Main Street.

The group is eager to meet with the community and get additional suggestions and input.

The Waurika REAP grant of $45,000 will be used for erecting walls, installing trusses, and installing the roof of the building located near the old Solitaire Mobile Homes manufacturing facility. Original intended use was for housing Oklahoma

Department of Corrections inmates. We are exploring the opportunities for housing other inmates as completion nears. The City of Waurika has committed $25,000 cash match to make a total of $70,000 to complete the project.