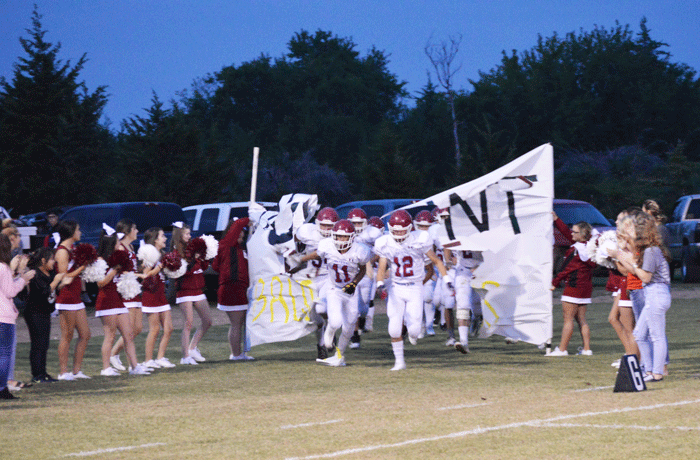 It is a long drive to Caddo. But the Waurika Eagles made quick work of the contest with the Bruins in coming away with a 48-0 victory last Friday night.

The Eagles move to 4-0 on the year and have not played past halftime in any of the games.

Waurika will move into district play Friday night as they travel to Wilson to face the Carter County Eagles. Kickoff is set for 7:30 p.m.

The defense came up big for the Eagles last Friday night at Caddo. Waurika took advantage of four Caddo turnovers – turning two of them into instant scores – and also blocked a punt that set up another score for Waurika.

That effort coupled with Waurika scoring three touchdowns in less than two minutes of clock time propelled the Eagles to the big victory and aided in taking command of the game midway through the first quarter.

The Eagles got on the scoreboard with 8:18 left in the first quarter that set off the flurry of scores.

Colton Bryant carried the pigskin in from 15 yards out and also ran for the two-point conversion to give Waurika an 8-0 edge.

Caddo was mounting a drive to answer the score, but fumbled the ball at the Eagle 45 and Edwin Garcia alertly scooped it up and returned it 55 yards for a touchdown. Kevin Garcia ran for the two points and Waurika held a 16-0 lead with 7:04 to play in the half.

The next Caddo possession also ended in a turnover and the Eagles took advantage.

Austin Dyer hauled in a 22-yard pass form Turner Mora and Mora ran for the two points and what had been a 0-0 deadlock just moments earlier was now a 24-0 Waurika advantage.

The Eagles got another break late in the first quarter as the Bruins were pinned deep in their own territory and fumbled the ball.

E. Garcia once again was in the right spot and picked up the loose ball and carried it 10 yards for a touchdown. Mora ran for the two-points and with 52 seconds to play in the first quarter, Waurika led, 32-0.

Midway through the second quarter, Bryant got his second score of the night on an eight-yard run. Zachary Brown ran for the two points and Waurika was in front, 40-0, with 7:21 to play before intermission.

Waurika closed out the scoring with Mora’s 23-yard scoring scamper and Matt Arriola tacked on the two-point conversion to put Waurika in front, 48-0, with 2:18 left until halftime.

Caddo could not answer and the game ended at the half on the 45-point mercy rule.

For the second time this season Mora led the Eagles in rushing with 73 yards on just six carries. Bryant tacked on 66 yards on nine carries and two scores.

EAGLE FLIGHTS: Waurika now leads the short series with Caddo, 3-2…..The 48 points score by Waurika is the most ever against Caddo and the 48-point margin of victory is also the most ever in the series…Waurika broke a two-game losing streak to the Bruins with the win…Waurika got its first eight-man victory over Caddo after two losses….The Eagles and Bruins played a two-game series in the late 80’s with Waurika winning both games handily…All three of Waurika’s wins over Caddo have been shutouts….Waurika has not started a season 4-0 since the 1989 season when the Eagles won their first nine games and carved out a 12-2 mark for the season…Despite the 4-0 start, the Eagles are not getting much respect around the state as they are unranked in every notable poll.